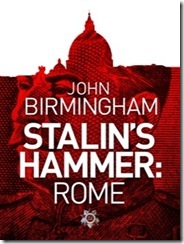 Stalin’s Hammer: Rome is the first in a set of serialised novellas from John Birmingham.  I managed to pick it up at the introductory price of $2.99 (it’s since reverted to $4.99).

So, I am ashamed to admit, this is my first Birmingham – but it won’t be my last.  Set in the alternate history of the Axis of Time series, it focuses on Stalin’s attempt to derail the future as the uptimers have foretold it.

But Stalin’s machinations largely take a back seat in this instalment. The setting is Rome, segregated much like Berlin was in our timeline.  The West on one side, the communists on the other.  We follow the adventures of two uptimers  Prince Harry, commando, heir to the future English throne and Pavel Ivanov, ex–Spetsnaz, freelance spy, as they attempt to uncover Stalin’s plans. There’s action and intrigue aplenty - a nice intro to the alternate history and it sets up some interesting plotlines for future resolution.

Birmingham’s style is engaging and the take on history inventive. I would have liked more of the story, but I guess that’s the point of serialised fiction, to get you to want to read more. It falls more into the camp of the post war spy fiction category in terms of pacing, the short nature of the medium really doesn’t allow for an escalating run up to a techno thriller ending.

I’ll be coming back for more.