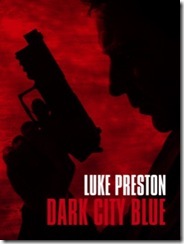 What can I say about Dark City Blue that others haven’t said already?

To tell you the truth it was Trent Jamieson’s quote that hooked me.  I trust his taste and Dark City Blue didn’t disappoint.  The idea – maverick cop goes undercover to expose graft and corruption in the police force, is not new.  Indeed were this set in America I think you’d already have cast Bruce Willis for the lead.

It’s mature stuff, breaking a ring of child abusing pornographers and unearthing the police presence in the running of teen brothels.  The violence is bloody – the main character gets beaten with a bag of crushed glass and shot. But there’s also heart and depth to our main character Tom Bishop, a man whose still keeping his head above water, despite what life has thrown at him.

Where Preston shines is in his ability to pull off a tale that is set in Australia while staying true to the hard boiled, thriller paced genre that has its genesis in American pop culture.  Dark City Blue feels very comfortable in its own bruised and bloodied skin.

Now, while I believe Dark City Blue to be Preston’s first published novel, he’s also received an inside film award for an unpublished screenplay.  The writing is tight, and the pacing superb and I can’t help wondering if the skills he’s developed in scriptwriting have bled over into writing a well structured novel.

Sometimes you don’t need to reinvent the wheel, you just need to produce one of quality. I’d easily drop dollars on the sequel.