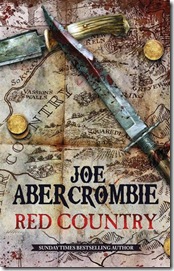 Red Country is Joe Abercrombie’s latest.  A fusion of his grim, gritty and cynical fantasy writing and a lifetime of watching afternoon matinee westerns.

Some might struggle with the concept, perhaps short swords and stetsons sounds a bit off key. But, hey, it is possible to fuse disparate genres - Whedon did it with Firefly and I'm inclined to think that Abercrombie has done the same in Red Country.

There’s a noticeable absence of firearms in the book and I’m pretty sure there aren’t any stetsons, but the story is packed full of tropes even the casual viewer or reader of the western genre will pick up on.

From evil marauding outlaws, to long, wagon laden convoys across vast plains.  There’s people searching for gold, a new life or both in the Far Country free from the trials and tribulations of living in the Union – free to build a better version of themselves or to hide the old one.

Shy South hoped to bury her bloody past and ride away smiling, but she’ll have to sharpen up some bad old ways to get her family back, and she’s not a woman to flinch from what needs doing.  She sets off in pursuit with only a pair of oxen and her cowardly old step father Lamb for company.  But it turns out Lamb’s buried a bloody past of his own.  And out in the lawless Far Country, the past never stays buried.

Their journey will take them across the barren plains to a frontier town gripped by gold fever, through feud, duel and massacre, high into the unmapped mountains to a reckoning with the Ghosts.  Even worse, it will force them into alliance with Nicomo Cosca, infamous soldier of fortune, and his feckless lawyer, Temple, two men no one should ever have to trust…

Regular readers of Abercrombie will know that the man has a preference for more modern dialogue. There’s a quite noticeable absence of archaic patterns of speech one might expect in Tolkien and a hell of a lot more cussin’. Red Country is presented in the same vein, with perhaps a slightly altered register and exposition that’s in keeping with the western mode.

Folk had swarmed to the bridge like flies to a midden, sucked in from across the wild and windy country to trade and drink, fight and fuck, laugh and cry and do whatever else folk did when they found themselves with company after weeks or months or even years without.

Again regular readers will know that aside from the fast, “in your face” violence, Abercrombie is known for his dark, dry wit and Red Country doesn’t disappoint.  There’s a number of exchanges between characters that had me in mind of some of the finer episodes of Deadwood. Not that I am saying that Abercrombie mimics the syntax and English usage in Deadwood but that the two share a similarity of rhythm in the verbal repartee between characters.

Oh and the swearing as well.

The other feature that struck me with Red Country is that Abercrombie’s world changes.  There’s progress from the time of The Blade Itself to this point.  There’s change  wrought by the demographic displacement of the gold rush and by the gradual development of industry.  By the end of Red Country we see the arrival of steam for instance.

In that sense Abercrombie's work, and Red Country continues this, is progressive and realistic, there’s little pining for the loss of the status quo. I thoroughly enjoyed the work, felt it straddled both genres well, it was Joe Abercrombie’s western infused fantasy not Joe Abercrombie trying to write a western.

You needn’t have read Abercrombie’s other works, this works very well on its own.

This book was provided by the publisher at no cost to my good person.