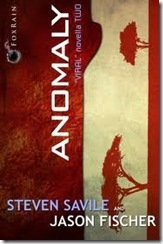 Anomaly is the second book in the “Viral” novella series that features the writing talents of Steven Savile with different up-and-comers from around the world.

The series is loosely linked, with events mentioned in one book, having an effect on the others.  Anomaly is the first in the series I have read.

I must say that this is one series where the cover sold me.  If it hadn’t been co-written by Jason I would have wanted to review it anyway, for some reason the cover just reached out to me.

So kudos to the cover artist.

This novella is set in Africa- Dadaab, Kenya initially.  Felix Koehler is a disgraced epidemiologist on personal mission of penance. He is working in the largest refugee camp in the world, his predecessor murdered after having succumb to graft and corruption.

He fights the good fight, helping manage outbreaks of disease, monitoring and dispensing vaccinations.  Only, they aren’t working as they should, statistical analysis reveals shocking mortality rates and Felix begins to suspect something untoward is happening.

As Felix begins to put the pieces of a horrific puzzle together, so do the conspirators and what is one man’s life when you would happily kill hundreds or thousands?

This could have been a novel

and I think it would have received 4 stars or more from me.  Jason(who normally writes Science Fiction/ Horror) and Steven have turned out a very nice thriller. The equal in skill and tone of any of the good thriller writers out there today Eisler, Childs, or Finder.

They give us a gritty, well realised Dadaab:

Felix Koehler looked out through the scratched perspex, watching the bleak landscape roll past. Empty plains baked beneath the sun, and a pick-up loaded with twitchy gunmen drove ahead of the UNHCR bus.

This close to Somalia, aid workers were snatched, ransomed if they were lucky. Dead the moment something went wrong.

The volunteers came to Kenya, and then they went home, but Felix Koehler stayed. As the bus passed through the gates and into the Ifo Refugee Camp, he braced himself for the familiar sights. A city of tents, rag domes and slum shacks littering the dustbowl landscape in the thousands. Tin ablution blocks, and here and there camp infrastructure, health posts and camp reception. The line-up for water stretched into the thousands, and people waited for up to two days to reach the head of the line.

and believable characters in Felix and Dr Valdez.  The pacing is a good  thriller writing, “always raising the stakes and moving the action on” style.

I was enthralled, invested in the characters and then… it was time to wrap it up.  The end felt rushed and all too easy.   I don’t know what sort of restraints Steven and Jason had to work under, but I think the story suffered for it in this instance.

Perhaps the story works better as part of the whole?

Anytime Jason and Steven want to write a full blown thriller I am in.

Note: This book was provided to me by the author at no cost.