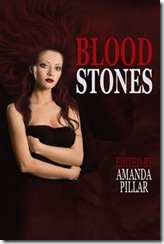 There’s a good mix of well known writers and some that I have not yet had the pleasure of meeting.  There’s also a pretty good gender balance with just over half being female writers.

It’s due out in October of this year.