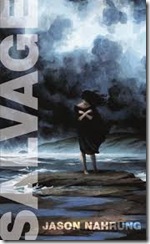 Salvage is a novella by Jason Nahrung, published by Twelfth Planet Press.

A seaside gothic, I believe Jason called it, and Salvage does indeed fit that bill.

It’s a mixture of subtle interpersonal horror and romance, though there are moments of vigorous, overt horror as well.

I think it best to come to this tale with as little knowledge as possible.  I had guessed some of the overt horror elements before picking it up and while it didn’t ruin my enjoyment I would have liked to have come to it as “clean” as possible. The blurb should suffice:

Seeking to salvage their foundering marriage, Melanie and Richard retreat to an isolated beach house on a remote Queensland island.

Intrigued by a chance encounter with a stranger, Melanie begins to drift away from her husband and towards Helena, only to discover that Helena has her own demons, ageless and steeped in blood.

As Richard’s world and Helena’s collide, Melanie must choose which future she wants, before the dark tide pulls her under … forever.

What I‘ve read of Nahrung’s work previously has made me uncomfortable in that glorious sense that good writers of Horror or Dark Fantasy do.  He achieves this by focussing more on the horror or tragedy to be found in the space between people.  In the ever so ordinary break down of relationships, family and friendships.

Salvage has  a subtle horror that cuts close to the bone.  For while we are unlikely to fall prey to werewolves or vampires (featuring in his early works), each of us has had the fortune of having built relationships and the misfortune of having them fail.

This horror in the every day is balanced with a careful, subtle crafting of the landscape.  Much like the watercolour by Dion Hamill that graces the cover, Nahrung does a wonderful job of layering subtleties from the first sentence.

The cabin emerged like a neglected mausoleum from the blue-velvet twilight, it’s bare timber walls bleached to the colour of old bone by the jeep’s headlights.

While Salvage is set on an island somewhere off the Queensland coast, Nahrung’s writing somehow manages to dull the Sunshine State’s weather, to cloud what should be an island paradise.

There’s some not so subtle eroticism as well; love, passion and death collide in a tale that offers you both a deft plucking of your heart strings and a churning of your insides.

Thanks for the discomfort Mr Nahrung.