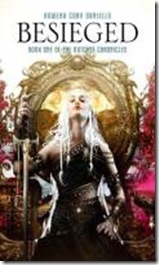 Rowena Cory Daniell’s latest, Besieged , should be hitting the shelves right about now.

Besieged (Book 1 of The Outcast Chronicles) is set in the same world as her earlier T’En trilogy.


For nearly 300 years the mystics have lived alongside the true-men, who barely tolerate them, until...

King Charald is cursed with a half-blood mystic son. Sorne is raised to be a weapon against the mystics. Desperate to win his father's respect, Sorne steals power to trigger visions. Unaware King Charald plans their downfall, the mystics are consumed by rivalry. Although physically stronger, the males' gifts are weaker than the females. Imoshen, the only female mystic to be raised by males, wants to end the feud. But the males resent her power and, even within her own sisterhood Imoshen's enemies believe she is addicted to the male gifts.

Sorne tries, but cannot win the respect of True-men. When he has a vision of half-bloods in danger he has to ask himself where his loyalty lies.
Convinced he can destroy the mystics, King Charald plans to lay siege to their island city. Will Imoshen win the trust of the mystic leaders and, if she does, will she believe the visions of a half-blood?


I interviewed Rowena here and have reviewed the first book of the King Rolen’s King Trilogy here.
She’s one of the few writers I would recommend buying by name alone.  I am hard pressed to think of a fantasy writer that can write fast paced adventure fantasy as well as her.

Booktopia has Besieged on sale at about $10.50 plus postage.  And  they  do a deal where you can order the whole trilogy ( they will be released over the next few months) and pay only once for postage.
Did you enjoy this post? Would you like to read more? You can subscribe to the blog through a reader,by Email or Follow me on twitter.