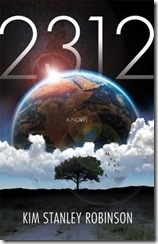 Publishers Weekly labelled 2312 a ‘A challenging, compelling masterpiece'.  While I think ‘masterpiece’ may be pre-empting its on-going cultural and historical relevance, 2312 is both challenging and compelling.
As the title suggests the novel is set 300 years from the future of its publication date.  With 2312 Robinson gives us what many “hard science” science fiction fans consider to be “real” science fiction - an idea or ideas explained, a future imagining to be marveled at for its vision, its sense of hope and its scientific plausibility.

Historically, character and plot in this kind of work tended to be secondary, a feature which wouldn’t float with today’s audience who have come to expect more involved plots and well rounded characters.

Thankfully, Robinson gives us a little of everything; epic ideas(the future setting and cultures of our solar system), compelling characters and an intriguing mystery.

The nature of 2312 makes it difficult to sum up adequately in one or two enticing paragraphs.  Sketching the narrative for the reader will not give you a true glimpse of what Robinson has provided, for 2312 is as much about humanity and future history as it is about the central protagonist Swan Er Hong.

Swan is a long lived spacer of altered gender - by 2012 our concept of binary sex and gender has blossomed into a myriad of wonderful possibilities. Once a designer of Terrarium’s (a cross between a transport, culture capsule and bio-ark) she has settled on Mercury as a artist, with her mentor Alex.
Swan resides in the city of Terminator which is chased by the sunrise and pushed along on rails that swell and expand with the Sun’s rays.  Alex’s death is the first event in what grows to become solar system changing crisis - a mystery that Swan and former colleagues of her mentor must unravel before catastrophe strikes.

And so what proceeds is somewhat of a tour of the solar system as Swan and the others dig into this mystery.  From a failed Earth, with its flooded shorelines and billions of poor, to surfing in the rings of Saturn.

I was reminded very early on of a children's book called, The First Travel Guide to the Moon, in which the author outlines what the reader will be able to do when the moon is colonised.
2312 manages to evoke a similar sense of wonder, albeit for an adult palate. The narrative is engaging and you come to love and be concerned for Swan and her friends. The mystery encourages the reader to postulate solutions themselves, to guess the perpetrator before the reveal.

All the while, however, Robison lays out the future for us to see and to be inspired by.  He does this through the narrative, by revealing aspects of characters, their histories and their work and by presenting Dos Passos-like 1 extracts and lists from unidentified sources, that act to further inform the reader of the “world” of 2312. Indeed sometimes they read like snippets of data culled from the radio waves but the collage works to build a sense of a wider “world” outside of the narrative.

This is the first Robinson that I have read and other commentators have remarked that this is Robinson doing what he does best.  I liked it and I felt pulled along by both the story and the setting at different times.

It’s not a book that will set your heart racing, though the narrative holds its own.  It is however, the sort of book that should fire synapses in your imagination.

Enjoy this like a quality wine- enjoy the look, feel and taste of 2312 .


1I am indebted to academic Gary K Wolfe for this term, which describes the interleaving of chapters of narrative, with fictional histories, extracts, artefacts, newspaper stories that act to generate a sense of a greater world separate but enclosing the narrative.  Brandon Sanderson used this to good effect in Alloy of Law.  For the origin of the term go here↩
Did you enjoy this review? Would you like to read more? You can subscribe to the blog through a reader,by Email or Follow me on twitter.
Posted by Sean Wright at 11:11 AM