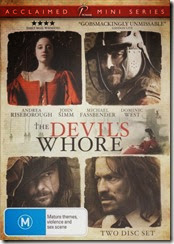 In a short addendum to yesterdays review, I do recall having watched a reasonably recent miniseries (around 2010) set in Cromwellian England, called The Devils Whore.  From memory it also included some supernatural/religious horror elements.  Upon checking if its still available I was pleasantly surprised to recognise some great English actors ie Michael Fassbender, John Simm, Peter Capaldi, Dominic West.

Set against the backdrop of the English Civil War, the manipulative Angelica exploits a country in crisis in a bid to better her own position. She abandons her loyalties to the Royal Family following the execution of her childhood sweetheart and first husband. Destitute, Angelica finds herself suddenly embroiled in murder and misadventure in a bitter struggle for survival.Fortune smiles on her once again in her alliance with Oliver Cromwell and her subsequent marriage to his trusted friend, the heroic revolutionary Rainsborough.

Angelica becomes Cromwell's confidante as he begins his reign over England. However, when her husband, protector and the father of her unborn child is murdered by Cromwell she is forced to face her demons.

Now the synopsis above doesn’t mention any supernatural elements so perhaps I am misremembering, but further digging reveals that this miniseries is set to receive a follow-up production called The Devil's Whore; New Worlds. So much for me saying that this era of history is under utilised.

I do note that its available from Booktopia, so while I am bitten by the bug I might have to run off and buy it.

Note:  Booktopia are having a free shipping promotion until midnight tonight for all those who forgot mothers day or are cheap bastards like me. The secret code is SNUG.