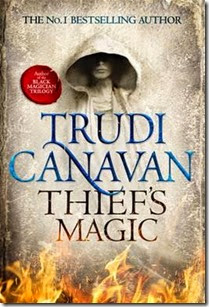 There are some writers that can guarantee you a pleasant read and I find Canavan to be one of those.  When you read constantly as a reviewer, torn between short fiction collections and mind-bending science fiction concepts, a pleasant comforting read can recharge your reading batteries.  Which is not to say Thief’s Magic is all sunshine and lolly-pops, it’s not.

But reading it was delicious.

Canavan has an accessible style that enables you to get into the story straight away, and from my interview with her and past reading experience this is a deliberate act.  Stylistically she doesn’t want you marvelling at the words but immersed in the story and that approach works a treat in Thief’s Magic.

The story is split between two narratives that I assume will wind their way towards each other over the course of the series.  We have Tyen, a young magician in training at the Academy, who lives in an imperialistic industrial culture powered by magic.  This narrative has a Steampunk vibe going for it but it’s a light garnishing.

The second narrative features Rielle, a young woman living in a male dominated desert culture whose magic is structured around the worship of angelic creatures.  It’s a culture and landscape that has been depleted of magic and restricts its use of magic to a patriarchal priesthood.

Tyen’s story begins when he discovers a magic artefact while on a grave robbing archaeological dig with his professor. The dusty old tome turns out to be a rather gruesome and powerful artefact whose discovery and subsequent use, turns his world upon its head – or perhaps it just enables Tyen to see the reality of his immediate world for the first time.

Rielle, has been able to sense magic from a young age in a society the represses magical use and especially magical use by women.  Her untrained talent must remain a secret if she is to fulfil her families plans of an advantageous marriage. She must avoid notice by the priesthood or risk being removed to a secluded monastery. Her story really begins with her falling for a painter who is famous but not an advantageous match.

The dual narratives play off each other well.  With Tyen’s story there is the constant threat of capture and with Rielle the reader is in constant fear of her talent being discovered.  Throw in friends and enemies, neither of who you can trust and this story hums along quite nicely.

Another feature of Canavan’s work is her inclusion of crunchy topics and a variety of characters and cultures.  I mentioned before that Tyen’s narrative is one set in an Industrial culture; it has magic driven printing presses and trains that use magic to heat water to generate steam.  But there’s both direct and indirect criticism of the Empire’s colonial actions and the growing problem of resource depletion i.e. the magic appears to be running out.

The two cultures presented also provide an interesting approach to how the same resource (magic) can be perceived and integrated into world views that are at odds with one another.  Canavan continues to provide a host of secondary characters that display variety, gay couples, artistic communities, women from matriarchal cultures in conflict with the apparently advanced mores of the empire.  She has done this before and I like the way these characters help to round out the reality of the world.

Thief’s Magic is one of those books that you can enjoy over a weekend, ensconced in your doona, a read that is relaxing and enjoyable but that can still leave you with some crunchy thoughts.  So although I hate to hurry-up an author who spends months or years writing a book to have it devoured in two days by readers – bring on book two.

This book was a review copy provided by the publisher.

Australian readers can purchase Thief’s Magic through Booktopia or Bookworld 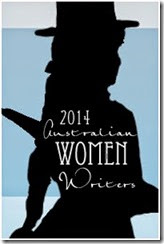