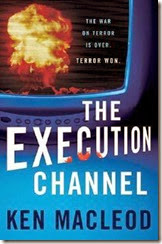 I borrowed this book after hearing Ken MacLeod speak on Galactic Chat. I think in general terms we share some political and social views so I was interested to see if this played out in his work.  I have also been impressed with most of the Scottish writers I have read, regardless of genre.

So, for a man who is known for writing sci-fi ( a contemporary and friend of Iain Banks) he writes a damn fine techno-thriller.

It's after 9/11. After the bombing. After the Iraq war. After 7/7. After the Iran war. After the nukes. After the flu. After the Straits. After Rosyth. In a world just down the road from our own, on-line bloggers vie with old-line political operatives and new-style police to determine just where reality lies.

It’s always difficult to write a techno-thriller, they have a limited life span because technology and politics can change reasonably quickly – just cast your eye of Tom Clancy’s works, or the movies made from them.  So what MacLeod has done is chosen a node in time and diverged from our history and presented us with a world that doesn’t look much different but that which, I think, gives the reader all the good stuff i.e. the action, the double dealing, the high stakes, without us feeling like we have read a book past its time.  It’s got the sense of our time, of the now.

The Execution Channel came out in 2007 and pretty much holds up under the passage of another 7 years. In a tech and information heavy story, Twitter’s absence was noticeable but then Twitter had only just been founded around the time the novel was being written. In terms of online exchanges and information culture and general world political culture though, he got it spot on.

In an England he no longer feels is England, the protagonist James Travis is spying for the French.  Travis hates Americans and feels the England of his childhood is gone, not the result of endless waves of immigration, but I think more from the cultural and political changes wrought to it’s institutions.

The detonation of a suspected nuclear device at a Scottish based American Air Force base acts as a catalyst for Travis to go on the run  when his activities for the French are caught up in the net that widens to pin down the culprit of the attack. So we have your standard tale of trying to catch the enemy agent, overlaid the question of which, if any, of the co-operating agencies who are tracking him are wholly good, overlaid with the murky and confusing world of strategic disinformation warfare.  Sprinkle this with advanced algorithms and networks based on the neural pathways of animals and we begin to question who the bad guys are, and if they are perhaps human.

It’s exceedingly well placed and it keeps you thinking and guessing right until the end. It’s one of the better techno-thrillers I have read in a long time and that is perhaps what might leave you feeling unsatisfied at the end.  It is too convincing as one genre, when in reality its ending is pure sci-fi. Other reviewers have felt this breaks a contract with the reader and I can see where they are coming from, it’s like watching From Dusk till Dawn thinking it’s a crime movie.

I enjoyed it for the ride alone, and being a sci-fi fan was able to stretch my suspension of disbelief to incorporate the ending. So a brilliant espionage, techno-thriller with a sci-fi sting at the end.