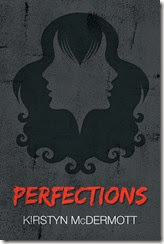 Listeners to Galactic Suburbia will already have heard the news, however is you aren’t into podcasts you might be interested that Kirstyn McDermott’s Perfections, originally released by Xoum publishing as an ebook, has been acquired by Twelfth Planet Press for its first print run.

The new cover is by the talented Amanda Rainey.

Here is my review of the novel on first release:

If you liked Madigan Mine, you’ll still like Perfections but they don’t occupy quite the same space.

Ian Mond, Kirstyn’s co-host on the Writer and the Critic described it as more of a character piece.    Kirstyn herself has tentatively called it modern urban gothic, situating it at the subtler end of the horror continuum.

And I think Perfections is a subtler piece of work than Madigan Mine. I always had suspicions with what was going on with Kirstyn’s first novel, it had a stronger affinity with well known Horror tropes.

Don’t get me wrong though, Perfections is still gut wrenchingly nasty at times, enough to really unsettle you but I was hard pressed to figure out where the horror was going to emerge - which of course kept me slightly on edge.

Now you notice here I am avoiding telling you the story.  And I am not going to reveal …[read on]

If you are a fan of subtle, creeping horror I recommend picking this one up.