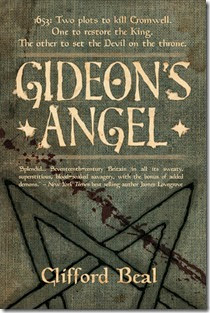 I finished The Raven’s Banquet Friday morning and because Beal had left me hanging off a cliff I dove straight into Gideon’s Angel and managed to finish it just as quickly.  They are both reasonably short novels by fantasy standards ie around the 250 page mark, but Beal has done a great job of filling them out, of making the most of the space.  I found Gideon’s Angel in particular well paced and like its prequel, compelling.

In fact I think I enjoyed it more.

The supernatural element definitely comes to the forefront in Gideon’s Angel, it’s much harder to explain happenings away as the result of a drug induced vision or the effects of epilepsy.  It’s hard to deny the reality of a hound of hell making mince meat of your leg.

Beal has been rather clever though in the way the story unfolds, much like an episode of Doctor Who deals with the Doctor’s appearance in historical England, the vast majority of people in the world of Gideon’s Angel are oblivious to the dark happenings.

And like a good Doctor Who episode Beal has given us some fan service, with everyone’s favourite Musketeer D'Artagnan making a lengthy appearance and for the poets amongst us, a certain Mr Milton is privy to the dark happenings, inspiring him no doubt to write a certain epic poem.

Now Beal is a trained swordsman and he has managed to let this training influence his fight scenes rather than overwhelm them.  I have read other works where the author’s expertise and display of such can throw you out of the text but Beal gives us the flavour without bogging down in description.  If you’re reading a work featuring swordplay who want it to feel like sword play is happening and not like you are reading a technical manual by one of the European masters.

So too on the gender front.  We have two female characters in Gideon’s Angel who get a reasonable amount of page time and who do have quite a bit of agency, Isabel the daughter of a Rabbi in hiding (whose knowledge of the Talmud comes in handy)  and Treadwell’s mistress Marguerite. We meet also with Anya the Gypsy fortune teller but all in all, I felt like their was more gender diverse participation in the story.  It must also be stressed that for Cromwellian England the central cast of heroes was also ethnically and religiously diverse.

If I were to be picky,  I have a small issue with the ending, which I won’t reveal but I will say it should have been problematic from the standpoint of resolution but for some reason it wasn’t.  I guess I felt I’d had my fill of action.

In any case I hope Solaris have signed Beal up for another book after these two, I’d really like to read the further adventures of Sir Richard Treadwell.

This book was provided by Solaris publishing.