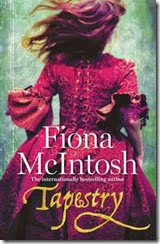 Forty odd dedicated souls stood in the freezing temperatures of a Clare valley winter evening to hear international bestselling author Fiona McIntosh launch her latest novel, Tapestry and to kick off fundraising for the Clare Writers festival of which she is patron.

McIntosh regaled the audience with stories of the research trips required to write Tapestry, including a behind the scenes look at the Tower of London. The crowd were treated to tales of Hitler’s toilet (the one the Brits hand installed in the Tower) and how Fiona almost caused a break in 700 years of tradition.  If you’ve not had the chance to listen to McIntosh talk I’d advise getting along to a launch - if she hadn’t become a best selling novelist she might have had a career in stand-up.

Tickets for the launch were twelve dollars with funds going toward the festival, but I think I would not be alone in saying that we got a bargain, being entertained by such a wonderful storyteller.

And being such a wonderful storyteller she sold me the book.

If you are a fan of reading about women who have been forgotten by history, then I think you’ll enjoy this book.  The novel grew out of the story of the Earl of Nithsdale’s audacious escape from the Tower of London, orchestrated by his wife.  A tale that would seem too ridiculous if not for the fact it actually happened.

Rather than a straight historical narrative McIntosh, like Audrey Niffenegger, has employed a time travel trope, in a story that will bring her two major audiences together.

The key to her future is trapped in the past.

In 1978, Jane Maxwell is celebrating her engagement to Will, a handsome American geophysicist, but though she should be deliriously happy, she is plagued by doubts. When tragedy leaves Will hanging between life and death, Jane's guilt makes her determined to save him ... somehow.

In 1715, the Earl of Nithsdale joins the doomed Jacobite rebellion for Scottish independence. But the cause is lost and the Earl is sentenced to be beheaded. On a desperate and dangerous quest to find some answers, Jane finds herself swept away and trapped in the past. Convinced that saving Nithsdale will also save Will, Jane embarks on a daring and audacious plot to rescue the Earl from the Tower of London. Past and present become entwined in a gripping race against time -- and both will be changed by one woman's determination...

Tapestry is available from Booktopia in both Paperback and eBook form.