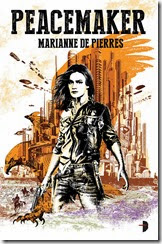 Marianne de Pierres’ Peacemaker, published by Angry Robot is getting an interactive game adaptation from award winning Western Australian games company Stirfire Studios.  Just like  it happens films the deal is only at the optioning stage, but considering the team involved there’s room for optimism.

de Pierres has long standing in the Australian Speculative fiction scene as author of The Parrish Plessis Series and The Sentients of Orion and recently she’s been successful with a foray into young adult category with The Night Creatures trilogy.

Stirfire Studios well known for their successful scrolling Freedom Fall game look to be trying something different this time with a move into interactive storytelling.

So I’m intrigued, scrolling games aren’t my thing but if Stirfire is going along more of a FPS or even something like Final Fantasy, I’d be interested.