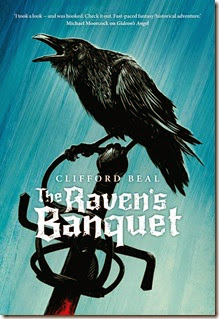 It struck me as I was reading The Raven’s Banquet that aside from repeated rehashing of Dumas’ Three Musketters in film form,  the 17th Century is a bit under utilised by the entertainment community at large, or perhaps this is one of those circular things that falls in and out of favour with the reading/viewing public or perhaps its just me and my reading choices.

The Raven’s Banquet is largely historical fiction, a prelude or prequel to Beal’s first book, Gideon’s Angel set in mid-17th century England and Europe, around the time of the English Civil War and other European conflicts.  So Cavaliers, Harquebusiers, black powder and swordplay.

I think the period on its own leaves plenty of room for entertaining tales of adventure, but Beal has managed to splice in some supernatural elements that give it a certain fantasy flavouring.

Now mid 17th century England and Europe for that matter, is still a time where superstition and witchcraft are believed to be a perfectly reasonable way of explaining events.  Beal presents the supernatural in such a way as the modern reader can either choose to view the magic or sorcery as real or accept that its plausible for the character to believe it is so.  In other words there’s no fireballs and levitation spells.

We are treated to a double narrative or perhaps a single narrative but split chronologically. First we have our protagonist Richard Treadwell writing letters in the Tower of London where he awaits trial as a traitor against an England ruled by Parliament . Second we have Treadwell recounting the tale of his youth and how he came to be the soldier his is.   The novel ends on a cliff-hanger, which if you are anything like me will result in you getting into the next book as soon as possible.

While not a breakneck thriller by any means The Raven’s Banquet certainly captured and held my attention.  There’s a bit of a leisurely set up, and Beal paints a convincing enough picture of time and place without going overboard.  The two things that really pulled me through the book and maintained my attention were the mysteries at the heart of the two tales.

I am not a student of English History, which has two benefits: I am unlikely to be thrown out of the text by obvious anachronisms and the history itself is something new and interesting.  Does it past the Bechdel test? No but that might also be a function of the mode in which the narrative is told i.e. it’s Treadwell telling his story from his perspective.  It’s pretty much a boys own adventure, the women and other secondary characters are really defined by how they help or hinder Treadwell.  That being said you do have some interesting roles being played by the various women that do appear.

So overall an engaging work, featuring what feels like a solid bit of world building or realisation, with some evenly paced action and mystery garnished with subtle supernatural horror.