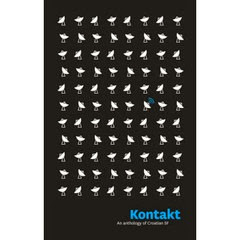 I have only recently come to appreciate the importance of a good translation. Only recently come to realise, indeed how much can change when a work undergoes translation, how much is lost or altered and perhaps why translation is so expensive i.e. you are not just paying someone to convert words, but to somehow embody the original meaning, intent, tone of the author in the new work. I would expect that to some considerable degree translation is almost as much of  an act of creation as writing the original work.

Which is why it is a pleasure to read Kontakt where the majority of the works were translated by the authors themselves with some additional editing by Tatjana Jambrišak,Goran Konvični, and Darko Macan.

As Cheryl Morgan outlines in her preface Kontakt was initially put together as part of a showcase of Croatian science fiction and made available in a short print run for members of the 2012 Eurocon held in Zagreb.  This ebook edition has been rendered so that what was originally only available to a few, can now reach a wider audience.

Darko Macan, author and co-editor is upfront in his introduction, he and his co-editor have put forward a particular viewpoint.  Croatian Science Fiction is dark, its history is long and the years from which these stories spring begin around the time a war for independence was fought.

It is the Croatian science fiction of the nineties and the naughts that we present to you in this book. The twelve included writers showcase, I believe, a good cross-section of voices and interests in the contemporary Croatian SF. I favoured, in choosing, the writers of continuous presence and a larger output. I erred, slightly, in favour of the upbeat notes (one or two characters were even spotted having fun) but I mercilessly stomped fantasy wherever I had the option to include science fiction instead – there is too much past in the Balkans already, so it is my firm belief we need not add any more.

But fear not, lovers of dark fantasy fiction, for Darko let a few fantastical stories through.

The collection kicks off with Bloodhound, by Milena Benini, a cyberpunk-ish tale with some of that darkness that Darko was alluding to.  Johnny Gobac a.k.a. Bloodhound, a hard-boiled half-dog ( I had an image of RIFTS Dogboys) on the search for a girl kidnapped by criminals producing certain unsavoury films.  It evokes a tone and a style that has links to the larger Cyberpunk movement but there’s a definite grittiness, a “what happens away from the chrome and neon” that we might not be used to from the American stream.

Dalibor Perković’s Hi-Tech Sex Lib, is proof that Croatian SF is not all doom and gloom. A humorous story about consumer time travel that focuses not on saving the world but on that most human of compulsions - sex and experimentation.  It asks the question, what would a couple do if they could meet their past or future selves.  Yes that question.  The ending is interesting and I can’t help thinking, that the saying  “that to truly love someone you must learn to love yourself” is apt here.

The Corridor by Darko Macan, apparently won international literary acclaim and I can see why.  It’s not a standard genre story, from the beginning the reader senses that it is more metaphorical, more surreal.  I felt as if the author was making comment on the absurdity of conflict of fighting against those who are just like us, those that share our humanity and the ridiculous and unquestioning nature of military life.  It’s worth a couple of reads and is one of the stories that made the most impact on me.

The Dead by Aleksandar Žiljak  somehow successfully merges a zombie tale with socialist sympathy.  Where you might say that US/UK zombie stories might be a comment on rampant consumerism, Žiljak shows that the shambling hordes can also be used as a criticism of capitalism.  Dead workers of the world unite!  A worthy story if you are tired of the run-o-the-mill Zombie tales.

I felt a bit detached from River Fairy by Ivana Delač, I think because the beginning felt a bit twee, but this may have been because I had just emerged from Žiljak’s story.  It is worth persevering though because it develops a nice fairytale quality i.e. dark and gruesome.

With De Cadenza we are treated to a bunch of sexual reprobates in space, it’s erotically humorous and baroque and a bit tongue in cheek. Despite its ornate and sumptuous delivery, I feel Danijel Bogdanović’s piece offers a refreshing palate cleanser.

And as soon as that palate is cleansed we are given Zoran Vlahović’s Every Time We Say Goodbye, a story more characteristically hard science fiction than perhaps the others and a war seen from the point of view of the wives of its warriors.  An interesting comment on the cost of war and on the reality of violence.

And war is a strong theme, as well as religion.  In Time Enough and Space we find ourselves in a Croatia that is receiving refugees from America, China and Russia after a limited nuclear war, families are forced to occupy rooms in houses, space and privacy are at a premium, until the protagonist finds a man selling space into another dimension.  Goran Konvični tips his hat towards Heinlein's Crooked House with this almost philosophical piece.

Katarina Brbora’s Avaleon and the Black Feather, features travelling to another dimension where God, Jesus and the Holy Mother are fighting against Satan in a Croatia on the black Sea ( migrations that occurred in our history never occurred in this alternative dimension), it’s less philosophical and more action orientated.

The Executor, features an inquisitor of sorts, sent to rid an isolated village of a disturbance. Zoran Krušvar’s gives us an Executor, that is pompous, impatient and at heart a coward.   I had a sense of where the story was going due to the set up but Krušvar amped up the darkness and well, it was a very interesting and slightly gory finish.

Despite Kontakt being a collection, a cross section of the Croatian science fiction community it  does seem to sit very well together. A lot of the stories have dark elements, even those that end well, perhaps this is what makes all of the stories seem to fit reasonably well together?  It’s not a darkness that seems oppressive though, maybe a little more honest, a little more realistic and world weary, carrying the weight of history and recent experience.

I come away with a definite sense of the tone of Croatian SF, one that I think many Australian speculative fiction writers might enjoy, considering our penchant for the dark and weird.

This collection was provided by Wizard’s Tower Press.