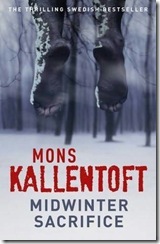 Magnus Utvik1 is quoted as saying “Don’t Bother with Stig Larsson, Kallentoft is better”.  Now while I wince at the promotion of one author at the expense of another Utvik is right about the quality of Kallentoft’s Midwinter Sacrifice.

Kallentoft with help from translator Neil Smith delivers a distinct impression of place, of Swedish culture, along with a chilling tale of murder and the dark underside of family relations.

The Story
A man is found beaten, tortured and hung in a tree. A midwinter sacrifice? Malin Fors, the police investigator begins to unravel the life and death of a man who nobody wanted or cared enough to know.  What she uncovers is the depths to which some will plunge to in search of love.

A cold and fractured land
Kallentoft paints a darkly beautiful backdrop of Sweden in midwinter, the ever present cold, the disparate communities of Sweden; the rich in their gated communities, the victims of the welfare state, and the newest arrivals in the darker skinned immigrants.

Character observations of the world around them can often be social comment in disguise.  I get none of that sense with Kallentoft, no authorial voice poking through.  Malin, our protagonist is a police officer and her reflections or observations on the world and culture around her sit firmly within the bounds of her role as an investigator.

Kallentoft balances Mailn’s detached observations with the voice of the first murder victim, who talks to her, urges her to keep going  - though she is not aware of him.  Malin is also firmly grounded in her own family and its problems, her own search for love.

A twisted love
Midwinter Sacrifice is compelling, the reader drawn in by the imagery and the mystery.  It’s a book that invites you to solve the mystery but plays its cards very close to its chest, not revealing the true state of things until the end.

Even at its conclusion, Kallentoft leaves us with a mystery, allowing perhaps those who don’t want to focus on the dark nature of humanity shudder and let the mystery lie, while the rest of us speculate.
There are books that seem to sit on the border between genre and literature, that appeal equally to those that have pitched their tent in either field.  This is one of those books- a ghastly tale of murder and the dark side of love.

This book was provided free of charge by the publisher
1. Noted Swedish author and critic.