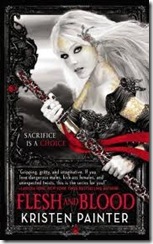 Flesh and Blood is the second in the House of Comarre series.  Yes. This is another series where I am reviewing  book two first..

Despite this I had no trouble picking up the story,  probably due to the fact that the genre of gothic fantasy with vampires is as old as Cain.  That and Ms Painter has provided the reader with a nice glossary that outlines her particular take on the genre.

Painter’s romance writing roots are evident in this novel; there’s a love triangle, two bad boy alpha males and a subplot which is romantic love in action. The sexual tension between characters, while not a focus of the nove,l is more prominent that in other Urban Fantasy I have read.  Don’t be put off by what romance there is though, Painter does a good job of balancing the romance with bloodthirsty action and a little mystery.

More True blood than Twilight.
Like True Blood (Sookie Stackhouse series) it’s a fairly light read and I found the characters to be believable. Chrysabelle is a strong protagonist that seems to suffer the psychological effects of her experiences more so than say the character of Sookie in Charlaine Harris’ novels.  The world and its mythical races seems to hang together a bit better too.

The dialogue and character motivation was a bit thin in places but Painter tells a good story and I was able to get past some of the weaknesses I perceived.

The Story
Chrysabelle, a comarre (humans bred to provide blood for Vampires) knows the location of the Ring of Sorrows, an artefact of dark power.  The mad noble vampire Tatiana of the House of Tepes wants it and will enjoy killing and torturing Chrysabelle to get it.

She’ll have to get through Malkolm her ex husband and patron of Chrysabelle as well as the newcomer Creek an ex-con and member of the mysterious Kubai Matta.

Just fresh enough
When writing about vampires, there’s not much wiggle room for originality.  The genre, dare I say it, has been done to death.  Painter manages to freshen it up enough for the story to flow.  The background isn’t all that original – the covenant has fallen Vampires are exposed to the world.  There are a plethora of clans/ divisions of vampires and various other mythical races.  If you’re a connoisseur of all things vampire there's echoes of various movies and roleplaying games in The House of Comarre series.

The only thing that really jarred for me was the story being set in the year 2067.  We have an android that appears briefly in the first half of the novel.  But other than that I am not sure why Painter set the novel in the future nor mentioned the technology other than for flavour.  It seemed tacked on to me. Flesh and Blood reads very much like it is set in contemporary America.

Like most book twos it serves mostly as a bridge from book one to three [1].  There’s some resolution for a couple of minor characters but in the end we are left with uncertainty for the protagonist and the appearance of a major villain.
An easy read, fans of Buffy or Blade will probably enjoy it.

This book was provided to me at no cost by the publisher.
[1] Having just looked at the publication schedule I note that there are actually five books in this series, all released within months of each other.  So perhaps the plotting is indicative more of serialised fiction.