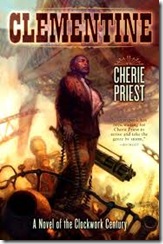 The sad news about this novella is that if you live outside the US you’re unlikely to be able to get an eBook version legally.

The Hardcover released by Subterranean Press is a collectors item retailing on Amazon at around the $95 mark.

You may be able to get a Audio download through Audible, but I have not investigated the process.

All this hassle is such a shame for what is a nice little jaunt in the Clockwork Century world.

Captain Hainey, ex-slave, now pirate captain is in hot pursuit of his airship which has been stolen - the fact that he stole it originally is beside the point.  No one steals from Croggon Beauregard Hainey.

Isabella Boyd is an ex –confederate spy employed by the Pinkertons to ensure that a certain stolen airship gets to its destination.

Two powerful personalities heading towards each other should mean carnage, and it does but not, as it turns out, for each other.  Croggon and Isabella become unlikely allies in a short, fast paced steampunk adventure, featuring armoured airships and weapons of mass destruction.

The ever resourceful Miss Boyd 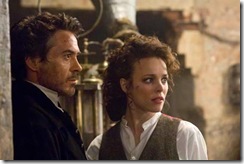 Isabella Boyd is the standout character in this book, down on her luck but resilient and resourceful, as quick with a sidearm as she is with her tongue. I am hoping that she turns up again in the rest of the Clockwork Century novels.

Indeed Rachael McAdams in her role as Irene Adler springs to mind as an excellent casting choice should this tale get optioned.

A tale of two publishers

Clementine was written for Subterranean Press.  Boneshaker, the first full length novel was written under contract with another publishing house, and while Priest was able to write for other publishers in the Clockwork Century world, there were restrictions, as I understand it, on the size of the work.

And that to my mind is the only drawback of this work, it’s over all too soon. It’s a beautifully written book with some wonderful dialogue and great action sequences. It is a nice addition to Priest’s alternate history.

Here’s hoping that with Boneshaker being optioned we might see a rerelease?

If you’re a fan of the Clockwork Century you’ll probably have it all ready.  If you want a taste of some of the best recent steampunk it’s worth picking up.  For those of us living outside the US it will prove difficult to get and I fear not worth the hassle.