Book Review- The House of Silk by Anthony Horowitz 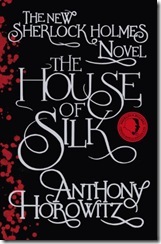 One of my earliest memories of reading Sherlock Holmes was The Adventure of the Speckled Band when I was 10.  Arthur Conan Doyle was one of the first authors I scoured the library to read. It was like a rite of passage, as he was located in the adult fiction section.

So it is with some fondness and anticipation that I took to reading the “Doyle Estate Approved” The House of Silk by Anthony Horowitz.
Horowitz seems aptly suited to the task, being the writer behind classic UK television shows such as Midsomer Murders, Poirot and  Foyle’s war.

Despite this history it has taken him some 8 years to finish it, insisting that he should take the time to get it right.


The Adventure
It’s no Guy Ritchie bromance with a subtle homoerotic subtext1. No, in most respects this is a return to classic Holmes.   The story starts with an aged Watson (Holmes is long dead) recounting their most startling adventure.  So shocking was the tale that Watson insisted that it not be published in his lifetime and so the manuscript was “discovered” in the vaults of Cox and Co. some hundred years after the passing of the great detective.

What begins as an investigation in to a simple robbery ends up revealing the darkness and depravity hidden by the thin veneer of propriety displayed by London’s high society.  This is not Holmes against the the individual criminal mastermind, this is Holmes against the movers and shakers of Victorian Britain.

In that sense it is a modern tale, and like Guy Ritchie’s take on Holmes, the stakes in The House of Silk are as high as they can possibly be.  Referencing of characters and old adventures abound, so much so that the Doyle connoisseur might tire of it. For the general Holmes reader it will probably pass without notice or encourage them to reread old tales.

It feels like the original
Horowitz has done such a good job of emulating the voice and mannerisms of Watson, the tone and style of a Victorian adventure tale that it does take a little while to get used to the rhythm of the tale.  My suggestion is to persevere, let yourself adjust to the style.  As with all mysteries there’s generally a slow start as the elements and facts of the case are put in place. The House of Silk with the reader being swept along at breakneck speed.

Boys own adventure
Like the original Conan Doyle stories the role of women is secondary.  Mary, Watson’s wife, gets a couple of lines of dialogue, but Hororwitz’ novel is boys own adventure.  This is of course in keeping with the type of novel it is or is trying to emulate. Readers looking for more gender balance will have to look elsewhere.

A pleasure to read.
Fans of the original stories will enjoy The House of Silk for its adherence to the tone and form of the original.  Those who have come late into the fold, perhaps after being intrigued by modern takes by Ritchie or BBC’s Sherlock will find its scope and “shocking” reveal appealing to modern tastes.
It was a pleasure to read. A guilty one at that.

This book was provided to me by the publisher at no cost.
1.  Watch the 2009 film again – the bit where Watson tells Holmes he’s getting married.