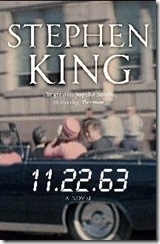 Given a chance to go back in time to before president Kennedy was shot, would you go back and try and save him?

That’s the predicament faced by mild mannered school teacher Jake Epping in 11.22.63 , who discovers that the local diner contains a portal back into 1958 America.

Nostalgia
King has done a wonderful job here in invoking a sense of nostalgia in me for a simpler time.  Which is quite a feat given that he has me pining for a time before I was born.  Perhaps he is aided by the cultural baggage associated with the Kennedy era that Hollywood is fond of exploiting and exporting.

A consummate weaver
The strength of this book lies in King’s complex layering of character and plot.  On reflection, the consequences of meddling with time should be blatantly obvious to both the reader and the character but it’s King’s skill and experience that shores up what would probably have fallen apart in the hands of another.

Neither Jake nor the reader are given the time to reflect on what meddling with time might do. King applies pressure from the outset - Al the owner of the diner where the portal is located, is dying and the lease can’t be renewed. So from the outset there’s time pressure.

The portal always links to 1958 and while returning through the portal to 1958 effectively erases all changes of previous visits, there’s a pressure to get things right first time as the time traveller still ages.
Initially this isn’t a problem, Jake runs a few “test missions”, altering the lives of people he knows who have had unfortunate life events.  This is done to convince himself that it’s possible and to understand the forces he’s up against in a past that doesn’t want to be changed.

But preventing the Kennedy assassination is a five year mission, if he stuffs up Jake can have a “do over’ but he’s a 5 years older, with another 5 years to fight against an obdurate past.

Intricate plot details aside it’s the characters that really made this novel for me.  So good was King’s portrayal of 60’s small Town Texas and the characters within, that I didn't care about Kennedy by about half way through the novel.

Herein lies another pressure - Jake falls in love with a woman and a town.  Jake and the reader are torn between wanting the life he is living in small town Texas protected and completing his mission to save Kennedy.

A tireless romantic
This book rammed home to me how much of a romantic I am.  I didn’t like the ending, but it’s true to the story.  At a hefty 700+ pages this is a book to pace yourself on, to enjoy the alternate reality that King has created.

Not a fan of the Kennedy era? It really doesn’t matter, the lives and characters King creates are enough to sustain interest.