Boneshaker is going to the movies 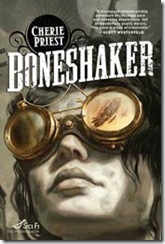 I heard about this two days ago but, well life got in the way.  Sufficed to say, Cherie Priest, author of American Steampunk novel Boneshaker has announced that there are plans to make the novel into a movie.  The details can  be found at her website.

To say that she was happy is an understatement.  The book has been described as Jules Verne meets resident evil and that’s a  pretty good description.

The film will be co produced by Hammer and Cross Creek Pictures.  Adapting Priest’s work will be John Hilary Shepherd who garnered award nominations for his writing on the comedy drama Nurse Jackie.