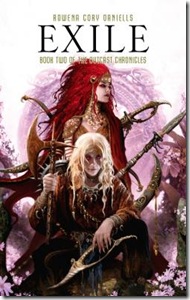 Exile is the second book of the Outcast Chronicles, the first I reviewed here.

The Outcast Chronicles are a prequel to Daniells’ 1999 sell-out series The Shadow Kingdom (called The Last T’en Trilogy in the US).

Whereas the Shadow Kingdom was an intimate fantasy tale, the Outcast Chronicles is a political power fantasy that is mature, confronting and damn near impossible to put down.

Exile is carefully crafted to background readers who have the misfortune to only have discovered book 2 in the series. I do, however, implore you to pick up Besieged. You’ll appreciate the additional build up of tension, and exploration of character.

The final pages of Besieged left us at the outskirts of the Celestial City with the forces of King Charald breaching the walls.  With Exile, readers will be relieved to note, the T’En are able to hold off the attack and there is an uneasy cessation to the fighting as King Charald seeks their surrender.

Imoshen is elected Causare of the T’En, more through Brotherhood division than popular sentiment and seeks to gain precious time for her people who are spread out and surrounded by the Mieren (humans) settlements.

King Charald wants to wipe the T’En from his kingdom.  Imoshen must save what she can to lead them into exile.  Can she hold her divided people together while their enemy contemplates genocide?  Can King Charald hold his Kingdom together with traitorous, barons nipping at his heals?

Exile is tightly written and rarely lets up the pace.  Any breaks in the pacing are filled with rich scenes of character development  that allow Daniells to entice you into caring deeply for her darlings.  Only when you have fallen in love with them does she apply the pressure, turning Exile into a page turner of exquisite torture.

But it doesn’t stop at the excellent display of craft. The exploration of gender and sexuality in Exile is a mature look not only at the possibility of real female political power but at the destructive culture that can develop in male only institutions.

Some of the treatment of Brotherhood members by their own organisations has echoes of the real life abuse and bastardisation that occurs  in organisations such as the military.

It was a discomforting read for me as a male, because it turned a critical eye to issues that we might like to handle with humour or not talk about at all.  Nonetheless it’s the fact that Daniells doesn’t shy away that makes the book and the series not only enjoyable fiction but a creation of something with substance.

I’d like to see a book from the series win the Norma K Hemming Award.

If you’re tired of the standard fantasy tale.  If you would like a fantasy with depth and colour, pick up the outcast chronicles.  All three titles were released this year so you will be treated to the rare delight of being able to pick up all the books in what I am sure will become your favourite trilogy.

This book was provided by the Author at no cost to me.