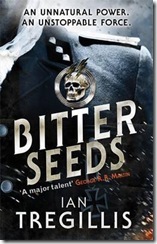 Bitter Seeds is Ian Tregillis’ debut novel, and the first in the Milkweed triptych.

Now with a tag line of “Mad English Warlocks battling twisted Nazi Psychics”, you could be forgiven for thinking it was going to have a weird science, pulpy vibe.

Not so.  Tregillis has succeeded in giving the reader a very down to earth, a very “English” in tone, World War II adventure tale. Which considering he is an American, is something of an achievement.

Initially I felt that Tregillis was trying too hard to get word usage right, to convince us that the characters were English, that he had done his research. For example, this thought from one of the characters, a second son of an aristocratic family:


The Hart had a cozy little snug. He made a mental note to invite the bird for a private drink later.

I tended to notice less of these as I read on.  So Tregillis either stopped trying as hard or the tale he told was good enough for me not to notice. I am leaning toward the latter.

So what we get with Bitter Seeds is not so much of a weird science tale but one of alternate history thriller.  The Nazi's through the evil genius of Dr Von Westarp have been experimenting on orphan children, turning them into psychics who use battery powered Willenskraft or willpower to perform feats such as telekinesis, pyrokinesis  and precognition.  They use this handful of altered humans to tactical advantage as the Phony War of 1939 turns into all out war.

The British Expeditionary force is destroyed at Dunkirk and desperate times call for desperate measures as the Warlocks of England are rounded up and put into service summoning Eidolons - entities who hate humankind and who can perform tasks at the spilling of human blood.

Aside from the level of research that has obviously gone into the work another facet that divorces it from the realm of weird science and pulp is the moral greyness.  The Nazi evil isn’t camped up and the behaviour of the allies in their dealings with the Eidolons is decidedly questionable, leaving the reader with the question of which is worse, Von Westarp’s experiments or the human sacrifice carried out by the Warlocks?

On reflection I note that Bitter Seeds is pretty much a boys own adventure.  There are four female characters – two of whom are members of the psychic powered Nazi unit. One of these women is a sociopath, and arguably set up to be the antagonist of the series, the other a mentally unstable target of a sexually violent male member of the same unit. The other two female characters are the wife and baby daughter of the protagonist.  Their characterisation is fairly light and in one case they seem to exist only to place the protagonist under pressure and to manipulate reader emotions.

I do hope that in the following works that we might get to see a female character playing a stronger role.  There is historical evidence for the involvement of women in World War II espionage activities, Nancy Wake for example.

That being said I thoroughly enjoyed Bitter Seeds.  Tregillis can spin a very compelling and well paced tale.  I will eagerly await the arrival of book two.

Trigger warning: While this book doesn’t touch on the holocaust, it does feature Nazi experimentation.