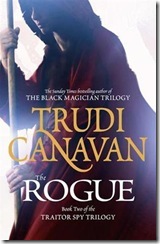 The Rogue picks up from where The Ambassadors Mission finished.  There’s some backgrounding for those readers who might be coming in at book two instead of book one.  In essence though, it’s your standard book two with a continuation of the overarching plot and some interesting subplots thrown in to increase the tension.

The Rogue is characterised by uncomplicated prose, a focus on relationships, adventure and as I have mentioned in the review of book one - magic that serves to enhance the narrative rather than be a complicated feature that needs considerable exposition.

In The Rogue Skellin is still at large.  Lord Lorkin is still under house arrest among the Sachakan Traitors and Dannyl, the Guild Ambassador is concentrating on searching for the answers to fill the holes in Guild History. The series seems to be building to a conflict, though at this stage I can’t quite work out whether its going to between the Sachakans and the Kyralians or if the hints that Canavan has dropped about Skellin’s people will feature more.

What impressed me about The Rogue was Canavan’s continual positive portrayal of same sex relationships.  It would have been easy to continue on just featuring the tension between Dannyl, Tayend and Acharti and left it at that. But Canavan went further than that and by books end we have three times as many same sex relationships featured than heterosexual. Its refreshing to see that the series is so widely well received.

I’d recommend Traitor Spy Series series as a gateway book into the fantasy genre as a whole and as an example of an author who can deliver positive representations of same sex relationships in what is generally a masculine centric and conservative field.

If you are a veteran reader of the field you may find the prose too uncomplicated, and the fantasy elements not particularly new , then again I think that Canavan’s exploration of gender roles and of sexuality are something worthy of reflection  I eagerly await the conclusion of book three.

I reviewed The Ambassadors Mission here.

I note that Booktopia have The Rogue and The Ambassadors Mission significantly discounted here.

This book was provided by the author at no cost to myself.