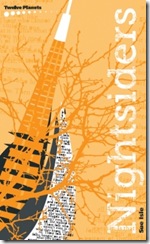 The brief given to authors was to write 4 short stories of up to 40,000 words in total.  The stories could be separate, discrete narratives or linked through character, setting or theme.

I think the concept is a brilliant one.  I have had the chance to sample authors I’d heard mentioned, but never read, discovered some authors I didn’t know about and finally, gained an appreciation of the powerhouse of female speculative fiction writing that goes largely unnoticed.

But on with the Review

Sue Isle gives the reader 4 short stories set in a futuristic  Australia on the brink of ecological and societal collapse.  There’s been a war and climate change has rendered the country dryer and more dangerous that it is currently.  Apart from one story, most of the action takes place in a futuristic Perth termed Nightside, as night the only time the majority of the population can get up and move around due to their sensitivity to heat and light.

Nightsiders is a bit of a mosiac, the stories are linked by setting and characters, though each varies in tone and subject matter to give you a distinct well rounded picture of a bleak future.

I don’t want to discuss the content in too much detail as I find with short fiction that it can rob the stories of some of their impact.

Paints a picture of what living outside the cities is like, what people are willing to do to survive and to profit.

Paper Dragons - a troupe of street actors who affect their new culture with memories of the old. ( shortlisted for Aurealis Award for Best Young Adult Short Story, 2010)

I liked this story because it focused on the arts and what an important part story telling is to civilisation.  I was briefly reminded of a scene in the movie Reign of Fire, where survivors act out the Empire Strikes back as a stage performance.

Nation of the Night - a boy born into the wrong body;

The only tale that takes place outside of Perth.  Set in Melbourne with a Nightsider as a central character, it’s a sympathetic portrayal of a transgender character in a near future dystopia where resources are scarce, our understanding of technology fading.

The Schoolteacher’s Tale - a teacher who is pushed into the role of guide.

I like it when schoolteachers are central characters.  When they are seen for the important service/role they provide.  I found the tone of this story more hopeful than the others.

This collection tapped into my love of futuristic dystopian narratives that started probably with the Mad Max films, though you won’t find petrol heads and spiked leather mutants here.

Isle provides us with a snapshot of a bleak future Australia, where everything we know has crumbled.  It’s a harsh world, but there are survivors and there is hope.

Nightsiders is refreshing and honest in a way that I think dystopian tales like Mad Max aren’t -people get on with their lives, those born into the new life know nothing else and feel no loss. We don’t turn into gun toting maniacs**.

*I feel compelled to mention the quality of TPP products. Beautiful covers, wonderful binding.  You feel like you are getting a top flight product – and you are.

**I still went and played Fallout 3 after reading it though.

Did you enjoy this review? Would you like to read more? You can subscribe to the blog through a reader,by Email or Follow me on twitter.  I also review at Goodreads, feel free to friend me there as well.
Posted by Sean Wright at 2:18 PM