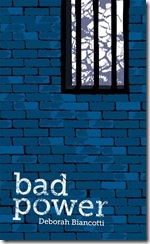 The jacket copy says “If you like Haven or heroes, you’ll love Bad power.”  While I think Heroes suffers from the American propensity to drag successful ideas out to the point where they lose dramatic tension, I really like Haven.

Bad power is more akin to the later, more subdued, and understated.  It also makes me think of Misfits, in the sense that having powers is never quite the as good asit might seem.

With Bad Power Biancotti has given us 5 stories2 that connect very smoothly with one another through the theme of power, the setting and the characters.  It’s more in line with previous Twelve Planet releases like Love and Romanpunk and Nightsiders but I would argue that Bad Power touches on becoming novella such is the smooth flow of the narrative between each of the stories.

Biancotti has done such a wonderful job with character and setting that I would gleefully return to the world of Bad Power.  I love speculative fiction books set in Australia, in places where I have walked the streets.  Fingers crossed Biancotti has something longer in the works based on her ideas presented here.

I think that Bad Power deserves some close reading once you get past the sheer enjoyment of reading what are very engaging stories. She raises questions subtly - about power and its use.

I also love the skilful play with words, evident most obviously in the tiles of the above pieces.  Tight layered writing.

2. 1 more story than usual for the 12 planets series, the book is similar in page count to Nightsiders which comes in at 138 pages↩

Did you enjoy this review? Would you like to read more? You can subscribe to the blog through a reader,by Email or Follow me on twitter. I also review at Goodreads, feel free to friend me there as well.
Posted by Sean Wright at 10:21 AM