Outland is too “teh Gay”

Jim Schembri writing over at that cultural monolith the Age doesn’t like Outland.  I know, strange isn’t he.  But then he’s entitled. We don’t all have to like the same thing otherwise we’d all end up watching shows like Rafters and Cop show rip-offs like City Homicide.

You should read it here

His objections boil down to

Now before hoist your fleshlights in the air and march on Melbourne let’s unpack what he’s saying.

Too much of the gay

Schembri  argues that with all the characters being gay there’s no contrast and no conflict between gay and straight.  That it lacks a straight-man in the comedic sense

To put it bluntly, Outland is a show badly in need of a straight man - both figuratively and literally.

I’d argue that Max is the straight man and Fab the comic foil.  Max is the “everygay” that I as a heterosexual male most closely relate to.

And as for too much of the gay.  I think by having an entirely gay cast Outland does something very important. It normalises1 homosexuality to an audience  that is largely conservative and does so without being preachy.

Outland then is not really about gays, it’s about science fiction fandom and being the other, which in turn folds back nicely into a comment of the position of homosexuals in our culture. It gets around the token gay character that’s used in a show to send a message or to pay lip service to equality.

The characters sexuality doesn’t really have an impact on me what it says about belonging does.

Too many penis references and not enough Jar Jar Binks

This is the point at which I think I understand why Schembri is not getting it.  No self respecting fan would raise the spectre of he of the floppy ears that should not be named.  Or maybe he just wanted more Star Wars jokes?

Outland is not a sitcom in the vein of The Big Bang Theory with the dumb, good looking blond with common sense contrasted against the specialised knowledge and social ineptness of 4 PhD holders.  So why contrast them with it?

It doesn’t tell you when to laugh, with long pauses and canned laughter.

And thank goodness. Shows that try to imitate what the Americans do, look exactly like that poor imitations.

I say enjoy the fact that it’s unique and remember that it’s squeezing that uniqueness into 6 episodes that focus on each of the characters.  Big Bang Theory had 17 episodes in its first season and has less main characters - indeed you could argue it has two.

A major opportunity at a mainstream, line-crossing sitcom has been missed with Outland. And, to be fair, a look at the subsequent episode on the preview disk was sat through. No improvement.

I don’t know that you can criticise it on the one hand for not being line crossing and then suggest that it mimic a certain Sitcom format.

Outland as I hope I have pointed out is doing a couple of unique things, sure it might not be for everyone and maybe your average Joe Blow is going to baulk at it but then if we made shows that appealed to the widest demographic then well we’d end up with MKR every night of the week …oh wait.. 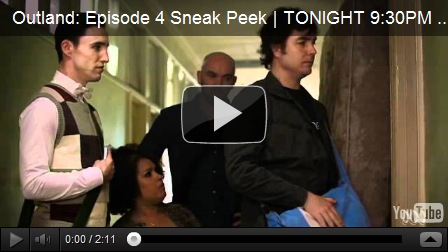 1. I hate the word but am at a loss to find something that expresses the idea that homosexuals are indeed normal, human beings↩