Dystopia’s - a vision of the future or echoes of the past? 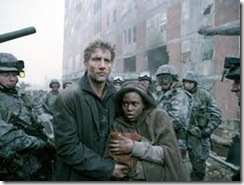 Sometimes I think that science fiction and its writers are not so much visionaries who peer into the future but rather have a good handle on the human condition and human nature – historians in as much as futurists.

Technology changes but essentially we don’t.

Three articles got me thinking about dystopias today and two of them have a historical element:

This one by Fence at Susanhatedliterature.net talks about the feminist activist Josephine and her actions in getting the Contagious Diseases Act abolished.

Born in 1828 Butler was an early feminist, and one of her causes became the abolishment of the Contagious Diseases Act. This horrible bit of legislation meant that any policeman could stop any woman walking the streets by herself and examine her to check if she was infected with veneral disease. Supposedly this was to stop men from visiting infected prostitutes and spreading the disease further.

Why not instead examine the men? Well

The second was an article in the Sydney Morning Herald about new consorting laws.  First brought in in the 20’s and 30’s to combat Razor gangs, they were scaled back because of police abuse and corruption and yet here we are brining them in to deal with bikie gangs

NEW laws designed to help police break up bikie gangs are open to abuse because they allow police to punish anyone who associates with people who have been convicted of a criminal offence in the past, a legal expert warns.

Alex Steel, an associate professor of criminal law at the University of NSW, said the planned legislation could be selectively enforced by police to discriminate, including against people in Aboriginal communities.

''The problem is this legislation casts the net so widely so that everyone who has been convicted of an indictable offence is on tenterhooks for the rest of their life,'' he said.

Last Marianne de Pierres  gives us a report of journalist drones operating in the Australia.  Strikingly reminiscent of her own Priers in the Parrish books.  Marianne’s post is here and a snippet of the article she refers to is below:

Drones play an increasing and controversial role in modern warfare. From Afghanistan and Pakistan to Iran and Yemen, they have become a ubiquitous symbol of Washington's war on terrorism.

Critics point to the mounting drone-induced death toll as evidence that machines, no matter how sophisticated, cannot discriminate between combatants and innocent bystanders.

Now drones are starting to fly into a more peaceful, yet equally controversial role in the media. Rapid technological advances in low-cost aerial platforms herald the age of drone journalism.

But it will not be all smooth flying: this new media tool can expect to be buffeted by the issues of safety, ethics and legality.

I’ll leave you here to ponder the title question, I have just had an idea for a story