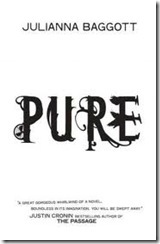 Pure from the outset is a striking book.  I mean that in a physical sense in addition to the narrative contained in its pages.

I have the edition pictured to the left, though the black lettering on mine is almost a metallic pearl colour.  The book from a distance would appear almost entirely white.

Some cover art is mere dressing, or a visual cue to attract a reader.  This cover of Pure is a beautiful artistic referencing of the story - kudos to Headline and the cover artist for a lovely piece of book art.  Hard, though it is to keep clean.

Young Adult?
It’s a coming of age novel, the protagonists are teens.  It’s already been marketed at fans of the Hunger Games and The Passage.

Which I fear may lead to it being pigeon-holed as a Young Adult novel.  Which is not bad in and of itself but would, I think, put off some adult readers who would otherwise really enjoy it.

It’s dystopic/apocalyptic near future science fiction - though you are likely to find it shelved under both science fiction and contemporary fiction.  This struggle to find a place for it suggest perhaps that it’s doing a good job of hitting different genre cues, that it is indeed a good story with wide appeal.

The Story
The setting is a beautifully created and detailed near future.  The world of the before is gone, obliterated in a nuclear and nanotech cleansing.

The Pure live in a sealed dome, a restrictive patriarchal society that enhances itself through gene manipulation.

Those that live outside are fusions of human and animals or human and inanimate objects.  The female protagonist Pressia, has her hand fused to the head of a baby doll, her friend has living birds embedded in his back - these are the lucky ones.  The cleansing has wrought more destruction and odd creatures neither human or animal lurk in the melt lands beyond what is left of the crumbling city.

The scope of Baggott’s world building is hard to quantify in a few paragraphs, it’s immense as it is terrifying.

Partridge our male protagonist is a Pure who’s desire is to escape the oppressive and rigid society of the Dome and find his mother who was stranded on the outside.  Pressia simply wants to look after her grandfather and avoid being taken by the OSR, a militia of fanatical killers intent on raising and army against the Pure.

Fate throws them in each others path, or so it seems and they embark on a journey to find Partridge’s mother. This journey turns their concept of the world and its warring factions on its head.  Who to trust, and who to fight becomes blurred.

Veiled Commentary
Interwoven with a simple story of a boy finding his mother are some exciting and terrifying technologies, some thought experiments on where certain science might lead us.
There’s also some very gentle commentary on various conservative movements existing in modern American society - the feminising of Feminism(really a cloaked conservatism), the influence and meddling of Church on State.

A slow start
It did seem to take a while for Pure to get going for me.  A side-effect of Baggott’s world building perhaps. The last 100 pages, however, flew by as events were brought to a head and revelations unfolded.  It was in that sense worth the wait and Baggott has done solid groundwork for the following two books in the trilogy.

Wide appeal
I enjoyed the book and I think fans of post apocalyptic dystopias presented in Mad Max, Blood of Heroes or 2000AD will also.

If science fiction isn’t your thing then call it contemporary fiction and allow yourself to enjoy the characterisation and vividly evoked setting.

It does contain violence, some shocking scenes and some mature concepts, but then if you are buying and reading post apocalyptic fiction that’s pretty much a given.

Did you enjoy this review? Would you like to read more? You can subscribe to the blog through a reader,by Email or Follow me on twitter. I also review at Goodreads, feel free to friend me there as well.