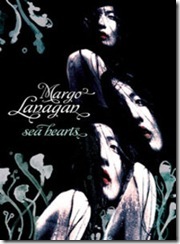 I have been captivated by Margo Lanagan’s skill as a writer since I read her short story Singing My Sister Down. I don’t recall any other short story evoking such emotion before or since.

I discovered Tender Morsels last year and that was another powerful display of skill, this time in novel form.

Sea Hearts 1 continues this showcasing of her skill, with language and narrative.  Reading Lanagan is like watching the world through aged glass.  The world and its characters are identifiable but there is a ripple, a distortion that separates us.

It’s in this distortion that Margo plays, drawing on folklore and legends, weaving them with the mundane, creating modern day folktales, presenting us with scenarios but passing no judgement.

She’s often pigeon-holed as a YA writer ( no doubt in part due to her very early works) but she’s had more than a toe dipped in the speculative fiction community for some time now.  I tend to view her work as mature fiction, with depth and power.  I would certainly recommend her to any intelligent reader 14 years and up.
An example of the depth of the novel is the multitude of angles that you can approach Sea Hearts from.  It’s a clever weaving of the legend of the Selkie into a moving narrative; it’s a comment on relationships between men and women, mothers and sons, the value of women, love, bullying, justice and revenge.

In simple plot terms, it’s the story of the Witch Misskaella who summons seal women from the sea to partner the men of the island and the ramifications of this action.  The story is told from the perspective of various people, from different generations, who are connected to the consequences or the Island in some fashion.

One of the highlights is Lanagan’s talent in shaping the English language to her own ends.  She’s joyously crude in some instances;


She snorted and matter flew out of one of her nostrils and into  the blanket. She knitted on savagely.  The bone’s rustling in the weed sent my boy-sacks up inside me like startled mice into their hole.

and powerfully understated in others


Ean, Froman, Hugh. Where do I begin with the questions I cannot ask her?….’But whose?’ I say. ‘Whose are you? What man of this isle got you on our Miss?’


Whereas the folktale often presents black and white characters – the handsome prince, the evil witch; Lanagan gives us a villain( if one can call her that), who is both a victim of a community and her own actions.   Misskaella’s actions cause others grief, pain and loss, but there is a sense that her actions if not justified, are human and understandable.

I was storm tossed by this novel, sympathising with Misskaella in one chapter, finding myself disgusted with her the next.  Whether a story is a comedy or a tragedy often depends on where you stop the telling.  We finish on a happy note with Sea Hearts but the reader has had to sail through a storm of sorrows to get there.

Sea Hearts will captivate and manipulate you. It will raise questions for you. When you emerge from Lanagan’s spell you won’t quite be the same.

This book was a review copy provided by Allen & Unwin
Sea Hearts is available in both Ebook and Paperback from Australian online retailer Booktopia.

1. The US/UK title is The Brides of Rollrock Island↩