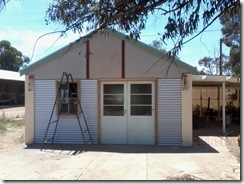 It’s been pretty manic around here of late.  Renovations on the 1950’s garage workshop are still on going and I have an awful feeling it’s going to cost a we bit more than anticipated.

I have also had unbelievable hassles trying to upgrade my internet connection to a wireless mobile hotspot - it seems that my trusty old E160E modem and sim card must have been born with super powers because I get near perfect reception with it but when I switch to the new modem I barely get a signal.  Gah!

So without further ado here are some links that I grabbed over the last week that might be of interest.

I thought this article did an alright job of explaining Gander Bias, Implicit bias why non biased people can actually generate a systematically biased culture and finally why it might be impossible or impractical to try and eradicate implicit bias in judging books.  Just read it.

Outland – an interview with creator John Richards | The Apathetic Reviewer

Jason Nahrung dutifully informs us that Aurealis Awards tickets have gone on sale and that the Chronos awards are open for nominations.  If you happen to be in Sydney around the May 12 you could be mixing with the hoi aristoi of Australian Speculative fiction.