Get Ben Peek’s Godless with Free Shipping from Booktopia 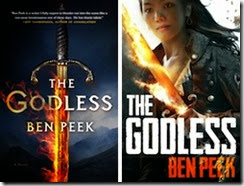 It doesn’t come out until the 1st of August, but Booktopia have Free Shipping until midnight Tuesday 29th of July. So if you want to pre-order The Godless Just go here, purchase and type WINTER in the appropriate coupon code box at the end of checkout.  You can of course use this coupon with any other book on the website.

I just happen to be reading an ARC of The Godless and really starting to enjoy it. 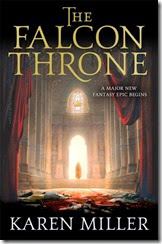 But why stop there, also coming out towards the end of August is a new epic fantasy from Aussie Karen Miller called, The Falcon Throne (also waiting in my review pile).  Here’s the low down:

Nobody is innocent. Every crown is tarnished. A royal child, believed dead, sets his eyes on regaining his father’s stolen throne. A bastard lord, uprising against his tyrant cousin, sheds more blood than he bargained for. A duke’s widow, defending her daughter, defies the ambitious lord who d control them both. And two brothers, divided by ambition, will learn the true meaning of treachery. All of this will come to pass, and the only certainty is that nothing will remain as it once was. As royal houses rise and fall, empires are reborn and friends become enemies, it becomes clear that much will be demanded of those who follow the path to power.

I have read the first couple of pages and its suitably dark and gruesome.  The Falcon Throne can be pre-ordered with the same Free Shipping here.