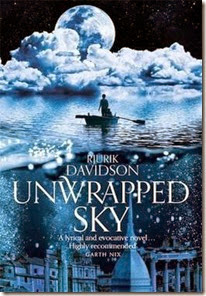 It’s hard to categorise Davidson’s Unwrapped Sky in more than a general sense (as Fantasy) and this is a good thing.

It’s vivid and evocative descriptions belie the origins of a world that began in the realm of short stories (several of Davidson’s earlier published short works are set in this world) where your words must do much heavier lifting.  Consequently Unwrapped Sky feels very richly realised to me, dirty, gritty, tangible.  In places this might slow the ride a little but when Davidson is directing our attention at something, the direction is not wasted.

The tale follows the fortunes of three principal characters: Kata, a philosopher assassin and agent of House Technis who is increasingly at odds with her employer’s world view;  Maximillian, a self taught thaumaturge and seditionist who dreams of confronting the Houses with their own magics; and Boris, a former tram worker who begins a quick(and perhaps unmerited) rise to power in House Technis.

If I must be forced to categorise it, Unwrapped Sky contains elements of Greek myth, industrial fantasy, post apocalypse and subtle weird horror.  It is also very definitely a novel that shows power and the powerful to be corrupt and corrupting.  The storyline features workers uniting against ancient houses after their calls for better working conditions are ignored, fallen godlike beings and the Elo-Talern - decrepit and decaying powers behind the throne.

Comparison’s have been made to China Miéville and I can see that on account of the weird horror elements and the sympathy Davidson generates for the working classes.  It’s by no means message fiction, more a refreshing change of perspective from conservative fantasy that sees us sympathising with characters that seek to return the world to the “natural order of things”  whether that be a quaint shire or the return to a benevolent monarchy under a protagonist who is the rightful heir.

This progressive take on the fantasy tale and its unnerving horror elements are the two standouts that I take away from Unwrapped Sky.   The flickering horse skull vision of the Elo-Talern, Alien monstrosities that appear odd and whole one moment then decayed and skeletal the next, is an enduring image.

If you are after fantasy that does something different with all of those aforementioned categories, I recommend Unwrapped Sky. Its perspective also sets some unique possibilities to diverge from the standard fantasy trilogy plotline.

Unwrapped Sky should be available in all good bookstores and can be ordered online from Booktopia and Bookworld.

An ebook version is also available through Bookworld.