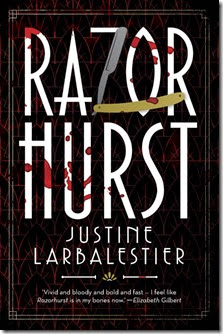 I had been interested in the release of this book for some time, I like the era and was most let down by Underbelly: Razor.  Now while this isn’t historical fiction per se, I do trust Larbalestier to bring the period to life as well as add some good speculative fiction elements.

If you are already interested, Booktopia have a free shipping deal on until tomorrow midnight (just type TELSTRA in the coupon box at the end of checkout).   Click here to get Razorhurst for $14.95.

Note: Free shipping can be used on any book.

So while I am waiting for my copy to arrive you can read the blurb below:

Kelpie and Dymphna are accustomed to the mean streets of 1930s Sydney, but this is a day that will test their courage, their loyalty, and their ability to survive both the ill-intentions of the living and the ever-presence of the dead.

The setting: 1932, Razorhurst. Two competing mob bosses - Gloriana Nelson and Mr Davidson - have reached a fragile peace.
Kelpie knows the dangers of the Sydney streets. Ghosts have kept her alive, steering her to food and safety, but they are also her torment.
Dymphna is Gloriana Nelson's 'best girl'. She knows the highs and lows of life, but she doesn't know what this day has in store for her.

When Dymphna meets Kelpie over the corpse of Jimmy Palmer, Dymphna's latest boyfriend, she pronounces herself Kelpie's new protector. But Dymphna's life is in danger too and she needs an ally. And while Jimmy's ghost wants to help, the dead cannot protect the living.
Gloriana Nelson's kingdom is crumbling and Mr Davidson is determined to have all of Razorhurst - including Dymphna. As loyalties shift and betrayal threatens at every turn, Dymphna and Kelpie are determined to survive what is becoming a day with a high body count.

Here is Justine talking about research that she did for Razorhurst: