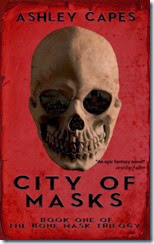 I have reviewed Capes’ work previously, notably his free verse collection Stepping Over Seasons.  I also admire his skill in the Japanese forms of Haibun and Haiku. And it’s not just me, one of his poems was selected by John Tranter for The Best Australian Poems 2012.

City of Masks isn’t poetry though, it’s not even realist/literary fiction.  It is, however, a damn good example of fantasy fiction and a great first novel.

So what does a debut novelist(or any novelist) want to do with a fantasy novel?  Entertain us, give us a mix of something new as well as giving us something familiar and entice us back for more.  On the first count Capes is good, City of Masks is a slick read, a mixture of political intrigue and thriller paced action.  The main cast of characters is wrong footed from beginning to end and Capes drip feeds the clues to the mysteries at the right points to allow the reader to keep slightly ahead of the characters.

So structurally, for a first time novel, I think it beats some more established writers.

Warm light fell on a large writing desk and chairs arranged before crackling flames in the fireplace. Above the mantle, set in a specially crafted setting, rested her father’s Greatmask. Argeon’s ancient face of bone stared down at her and she shivered. Impossible not to think of the mask as watching her. He was not a typical mask by any stretch. A presence, a life, lurked within Argeon’s dark sockets.

On the choice of setting, Capes gives us a port city settled by the Anaskari, a vaguely Italian/Venetian culture whose secret police, the Mascare, wear carved bone masks and ominous red cloaks. It’s a place ripe for secrecy and political manoeuvring. Several noble families jostle around an increasingly infirm King for favour and power.  So yes, robed secret police, politicking and vaguely Venetian settings have been done before but I was intrigued about the Greatmasks; bone masks of power passed down through families that are imprinted with the wearer’s thoughts and personalities.

I also like the addition of a dispossessed people, the Medah, a desert people who used to occupy the land the city was built upon.  They were defeated in a war with the Anaskari and consigned to a nomadic lifestyle in the desert wastes. They yearn for revenge and to oust the invaders. It will be interesting where Capes takes this plot thread as they are presented not unsympathetically.

Capes balances this familiar setting, with cool additions with likeable and well rounded characters.  There are two chief protagonists, with a secondary cast backing them up.  Sofia, is a scion of House Falco who are charged with the protection of the crown. Sofia’s father will, however, be succeeded by her elder brother and she is resigned (not entirely enthusiastically) to carving Mascare masks and eventually producing more of the Falco line.

Until certain events place her at the centre of things.

Now as one of the main protagonists I did feel at times that she lacked agency, though to be fair she was faced with older and more skilled opponents at almost every turn, so my discomfort is perhaps more one of annoyance at a central figure being constantly frustrated in their efforts, than her being a damsel in distress.  I hope that we will see her grow in competence as the tale progresses.  I think Capes is walking fine line between pushing against suspension of disbelief and having a kick arse central character.  He got me invested, I just wanted to see her get some runs on the board.

The second main protagonist is Notch, a veteran and hero of the  war against the Medah. We are introduced to him first, imprisoned on account of a murder he can’t remember. He’s slightly worn, a little jaded and cares little for subtlety.  He’s not stupid but he tends to want to act before thinking - a failing that probably curbs any advantage of experience he might have held over Sofia, as even he is outclassed by the villains of the tale.  Major supporting roles are filled by Flir, the fair skinned Renovar woman who wields inhuman strength, Seto a mysterious crime lord who bank rolls much of their response and Luik the cook.

The Medah, represented by Ain the pathfinder, charged with finding a way through the desert wastes to the homeland of his people and to destroy the Anaskari invaders, pilots a secondary plot for much of this tale and while his actions do influence the action in the city, I feel he will become a much larger part of book two.

I hate cliff-hangers in trilogies and thankfully City of Masks doesn’t have one.  The novel has a satisfactory resolution but leaves some plot threads open for us to pick up on in book two.  Capes has sketched a compelling world, given us two likeable leading characters and kept me entertained for the entire and engaged the entire novel.

A very successful first outing, I am surprised that he wasn’t picked up by one of our large local publishing houses but has been instead snapped up by Snapping Turtle out of New Zealand who publish Jennifer Fallon's books.

You can purchase the novel through links here.

This e-arc was provided by the author.  Quotes may not reflect the final text of the novel.