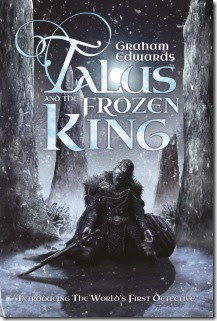 The tagline reads Introducing the worlds first detective.  If you have ever wondered what Sherlock Holmes crossed with the Neolithic era might be like Talus and the Frozen King will give you a reasonable idea.

The reader is introduced to two travelling companions on their way north following the Aurora Borealis in the hope that it will lead them to the place where all the worlds meet and one of the characters will be given one last time to talk to his dead wife. On the way they come across a settlement and hear the voices of people wailing.  Never one to overlook a mystery Talus and Bran (who is having second thoughts about their journey) make their way towards the village where they find that a King has been murdered.  Talus and Bran, are the only ones who can unearth the killer, but first they have to disperse the fog of suspicion that crowds around all strangers in this cold and isolated village.

The parallels between Sherlock Holmes and the two main characters are, I think obvious, and deliberate.  Talus, the book’s Holmes, is a story teller, a bard who doubts the existence of the spirit world, who sees truth in patterns and concrete evidence but who has difficulty with emotions and understanding love.  Bran, the Neolithic Watson, is a disfigured ex-fisherman, with a temper and a good axe-arm.  Talus pieces the clues together and uses Bran to tease out the connections in much the same way Holmes does with Watson.  We even have a criminal mastermind.

Talus and the Frozen King works well enough as a mystery and at keeping the reader guessing with a plethora of possible suspects and some interesting personal relationships. Where it fell down for me was in some of the world building.  Edwards does a good job with the creation of the landscape and the physicality of the setting but a couple of things dropped me out of the flow of reading.

Now Talus and the Frozen King is set in the Neolithic age, aside from physical evidence left by these peoples, there’s not much for a writer to go on, you’re essentially writing fantasy.  I found some of the names in the book jarring, they didn’t seem to ring true to either historical names (which is fair enough, you try finding a neolithic baby name clay tablet) nor any sort of naming/cultural convention set up in the world that’s been created. I felt as if the names were drawn from periods of history much later than the setting ie Talus is a Greek name, Tia an Egyptian queen from the 19th dynasty, Bran, a welsh name from the 12th Century.  There was a chance here I think to create a certain verisimilitude by having names that could be linked to the culture in some way.

How powerful and important are names to a book’s world building? This is highlighted in the name of Lethriel, one of the major characters in  Talus and the Frozen King.  If you dear reader are not automatically thinking of an elven princess you are lucky. Such is the power Tolkien’s pseudohistory/myth on the genre. It is such a seemingly small thing, but I felt there was a missed opportunity to spend a bit more time on the names of characters and how they might connect, support and evoke the setting.  Especially since it looks to be a continuing series.

The second issue I had was with an instance of what felt like klunky back story exposition early on in the book that explains some of Talus’ history.  It’s necessary for a later reveal but I was really conscious that I, the reader, was being told this information for a very important reason.  I like my back story drip fed a little more.

I think what Edwards has tried to do is ambitious, how do you create a Holmesian character in a world where philosophy, science and logic are still in their infancy. How do you create the world’s first detective without it feeling like it’s Holmes and Watson in bear fur. I think the answer lies in exceptional world and character building.  Which in all fairness is perhaps beyond what the author had scope to produce.  You can have a pacey murder mystery set in the Neolithic which is a fun, light read or you can spend 10 years trying to produce something resembling Hild.

The landscape was beautifully evoked but I wasn’t entirely convinced of the Neolithic world the characters inhabited in a cultural sense. I felt Talus and the Frozen King was still a fairly modern Holmesian murder mystery (and a reasonable one at that). So if you like Holmes and Watson-like characters in your murder mysteries and you are tired of the body count in Midsomer, give it a go.