Book Releases - The Best Science Fiction and Fantasy of the Year Vol. 8 edited by Jonathan Strahan 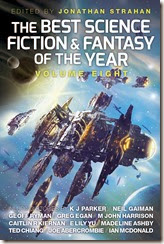 Just a heads up for those folks not hanging off every word of the Coode Street Podcast where Jonathan may have mentioned (though he’s modest about these things) he had sold The Best Science Fiction and Fantasy of the Year Volume 8 to the folk at Solaris.

The folks at Solaris are pretty excited too:

The celebrated The Best Science Fiction and Fantasy of the Year series comes to the UK – Solaris is proud to be the new home for the latest volume in Jonathan Strahan’s critically-acclaimed SFF anthology series!

and the table of contents is pretty impressive:

The best, most original, and brightest science fiction and fantasy stories from around the globe from the past twelve months are brought together in one collection by the multiple-award-winning editor. This highly popular series is released in the UK for the first time and includes stories from both the biggest names in the field and the most exciting new talents, including Neil Gaiman, Joe Abercrombie, Karin Tidbeck, An Owomoyela, Madeline Ashby, Lavie Tidhar, Charlie Jane Anders, Geoff Ryman, Caitlin R Kiernan and many more.

This is a monster of a collection some 620 pages of fiction from the best in the business.  It features new writers like Benjanun Sriduangkaew and Sofia Samatar and on a casual glance seems to be making a definite attempt at being gender and culturally diverse.

Note: Booktopia have the book available for pre-order (it’s released on the 10th of April) if Australians order before the 16th of this month (Sunday midnight) and enter the coupon code MARCH at checkout you can get free shipping.  Pre-order it here.