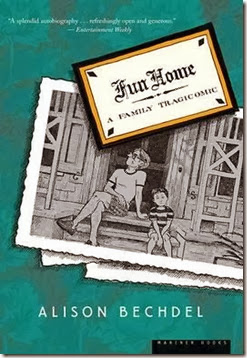 I knew of Alison Bechdel from listening to the Galactic Suburbia Podcast, and knew of her particularly from the Bechdel test ( a rough rule of thumb for determining whether or not a creative work is gender biased). So on hearing that she was the headline act at the Comics Can Do Anything stream at Adelaide Writers Week I was determined to go and see her.

One of the best, most professional presenters I have seen in recent times.  If you get the chance to attend a talk by her, regardless of whether you are interested in feminism or QUILTBAG issues or graphic novels, go. You won’t be disappointed.

Fun Home seems to have been the book that really launched Bechdel to the wider world.  Previously she had been famous for her self syndicated comic strip Dykes To Watch Out For, which ran for some 31 years.  While I certainly enjoyed the humour, the observations and the political commentary in Dykes to Watch Out For I can see why Fun Home reached a wider audience.

For a start it’s a memoir and a somewhat tragic one at that, which explores Bechdel’s life and her relationship with her father.  People always seem drawn to a well articulated rendition of someone else’s misfortune or tragedy. But by and large it’s the choice of image, combined with Bechdel’s voiced over recollection that really made this work stand out for me. There’s a couple of stand out panels where the words and the image leave space for the reader to make connections, making for a subtle but powerful statement/impact on the reader.

There is a forward progression in the narrative but each chapter seems to pursue its own trajectory and as such it’s not a linear tale from early memory to Bechdel’s father’s death.  It seems to me to more like sitting and listening/watching different aspects of the same tale.  Bechdel following one thread of thought and imagery in one chapter and others in following chapters.  In that sense we get a layering, an organic approach, which to my mind is possibly more akin to how our own memory works than the standard chronological recording that might organise your standard memoir

It might have been post festival blues, but reading Fun Home did seem to leave me with a palpable sense of melancholy. That to my mind is a momentous achievement in any text, to engage with the emotions of the reader.

Fun Home is a tragicomic, there’s sadness but there’s also recognition and love in all its diverse manifestations.