Book Review – The Gospel of Loki by Joanne M. Harris 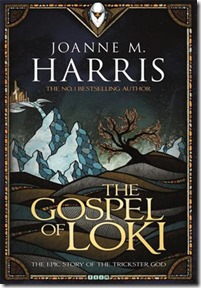 Any author who sets out to tackle the Norse mythology in the current climate of Marvel blockbusters has an interesting task on their hands.  Some readers will come to the story knowing only the tales as told through the prism of otherworldly superheros. There will be certain expectations, a certain idea of what makes a good Loki, for example.  Then there are those who draw their experience of Asgard from tradition or folk lore, from the many fantasy interpretations that have come about during the many periods of resurgent interest.  That’s not to say that these groups won’t mingle nor indeed that a single person can’t enjoy both interpretations but there exists in the public conscience some strong ideas.

So what has Harris done with The Gospel of Loki? Well I think she has trod a middle path.  While her Loki lacks the gravitas that drips from Tom Hiddleston’s portrayal of Loki, there’s a definite likeable rogue in her Loki, a misunderstood soul - who will tell you as much with a twinkle in his eye.  There is much to like in Harris’ Loki, he feels more honest and real, the other gods are too saccharin for my taste to be likable.  With Loki you know you can never trust him, but you will like having him around.

Oh he’s a bastard for sure, don’t get me wrong.

The Gospel of Loki walks the middle path by having a protagonist with a very modern register but still structuring the work as if it were a folk tale.  The novel is split into a number of books, which are then split into a number of small lessons or chapters each headed with an epigram from Loki’s own sayings, for example :

Each of these lessons presents a short tale, taken from folklore, and while Loki relates the tale in the first person and in a modern register, the tales themselves are light on, in terms of world building, just like a folktale. There is no attempt to try and explain the god’s magic or Glam outside of its existence, nor how the power of runes work, they just do.

These chapters I think also provide  much needed rest stops from the first person point of view which can be wearing on the reader if you’re not careful.

I think if you like Tom Hiddleston’s Loki, you’ll appreciate Harris’.  Likewise if you have a preference for the traditional over the super heroic you’ll enjoy the many stories drawn together in The Gospel of Loki, to produce a nice cohesive narrative.