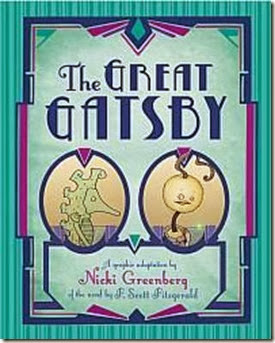 If you are not a comic book writer or illustrator I’d suggest attending talks where these folk (sometimes one and the same person) talk about their process. In my case it has highlighted some of the ingenuity that my eyes have taken for granted.  I always find that in reading a comic or graphic novel that I am missing, at least consciously, some of the artistry that exists in the image work.

I had the great pleasure of listening to Nicki Greenberg talk about the process of adapting works to the visual form. It was literally eye opening, hearing her talk about choices, obstacles and opportunities for conveying information in the comic/visual genre.

Nicki is quite famous for having sold her first The Digits series, while still in high school. The Great Gatsby adapted from the F. Scott Fitzgerald classic was her labour of love begun and finished before she knew if it was available from a copyright standpoint( it was in Australia and New Zealand).

Thankfully during the 6 years it took to create, the image (if you’ll excuse the pun) of comics or graphic novels improved and Allen & Unwin stepped in to publish it.

It’s 300 pages in length and slightly squat in its finished form.  The form is deliberate ( something I would not have noticed before) in that it is designed to mimic the dimensions of a photo album.  Each of the panels is bordered in photo edging and the entire book is done in sepia.  Nick Carraway our narrator is piecing together the events covered in the novel by way of constructing a photo album.

There’s some interesting effects that occur here, the reader is watching Carraway as he constructs the very book they are reading/viewing.

Greenberg has a reputation for drawing interesting non-human  depictions of characters and this is evident in the creation of a host of different creatures for the main characters in the book.  Nick Carraway is an unassuming slug, Daisy is a puff headed fluff ball, Gatsby a seahorse, Tom Buchannan a brutish ogre and Jordan Baker a squid, to name a few.  It’s interesting to map these depictions to certain character traits.

I haven’t read the original, but I do feel as though Greenberg has captured the era, and the zeitgeist well. The outrageously rich, the parties, the veneer and the shallowness.  I am now curious to read F. Scott Fitzgerald.

I think The Great Gatsby would work as an excellent gateway into appreciating what can and is being done with graphic novels.  I think fans or the original text will enjoy the visual interpretation and indeed will probably glean more from the adaptation than I would.

Clever and slightly bizarre, it fits the period well and was a pleasure to read.