Just a quick reminder to … erm remind you that a team of very dedicated creatives is undergoing a very wacky experiment in the name of science and entertainment.

The experiment proper has started and its interesting peering into the heads of Sean Williams and Jennifer Mills as they articulate feelings and relay observations of the effect of isolation and sleep deprivation.

I’m writing in my ‘free time’ between tests. These are checking my cognitive functions: response time, comprehension, and judgement. The tests are strange and very repetitive. There’s a device called a PVT which looks like it should be part of a 1980s robot. There’s a dinky little driving simulator (I crashed). Another test shows us the word Yellow coloured green, or the word Red coloured blue, and asks us to distinguish between the colour and the word. I already feel an estrangement between words and things. Partly in response to this, I have started to draw the objects in my room.

My ‘free time’ is neither, and soon interrupted for another test. Addition and subtraction. When my screen reads “2+2=” I think of Winston Smith, my imaginary companion in this dim cell. Should I put 5? Only the scientists have the answer.

After our tour and intro, we settled in for a practice run. (Have I used “practice” right? This is something I always get wrong, and now I can’t check. Life without the web is going to be tough, particularly as the protocol kicks in and our brains melt into mud. As Jenn says, let’s have an embargo on typos, okay?) The tests are not especially riveting, but that’s not unexpected either. The first is a test of our response times (“PVT” it’s called, I found out later: Performance Vigilance Task). We hold a box and push a button when the screen lights up. A number tells us how fast we reacted. I already hate this test, because the box is heavy and it involves both my hands, and I have to sit grimly in place for ten minutes. It feels like an hour. At the end of the first run, my muscles were screaming. My results were slightly slower than average, but that could be because I was using my left hand. Or I was too distracted by the discomfort to pay attention properly. Or I’m just rotten at it.

After an age, instructions come through the intercom on the wall above my bed: Keep your eyes open for thirty seconds (am I allowed to blink? I have to blink. I’m blinking. I’m not in trouble for blinking!); blink five times slowly (Ah, sweet blinking). Winston would remember this bit. At last, with much gratitude, the lights go down to “moonlight setting” and I sleep until Scientist Xuan wakes me. It’s long enough to dream a little. The only thing I remember about my dreams is that I played the role of 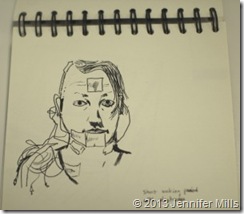 babysitter. Waking, I feel more like the baby. Xuan tells me I will be put back to bed again after a short time. This means the electrodes stay in, and I rush to the bathroom to see what I look like. I look like this:

The sound of air-conditioning could be fake. I deduced this while doing some stretches. The ever-present hissing sound is actually coming from what appears to be a speaker set into the ceiling, near the vent. My guess is they’re pumping in white or pink noise to cover up the sounds around us (the centre is on a very busy arterial road) and perhaps for some psychological benefit, too, as background noise helps the mind function under some circumstances. When I asked about, I got a weird reaction, like it was a big secret. Like I had opened the wrong door and seen THE ALIENS. I changed the subject immediately. Who wants to be put in the grinder for KNOWING TOO MUCH? (Alternatively, that “speaker” is an intake vent, which might explain why I can’t feel any air movement when I put my hand near it. That’s the sane explanation.)

Please do go and read all the entries(start here).  It’s interesting comparing the subjects observations which often parallel each other.  And it’s amazing how quickly thoughts seem to edge slowly toward paranoia.

Note: “The Subjects” experiment is being run and the participants observations published by the Australian Network for Art & Technology (ANAT).  The material quoted here is published under a Creative Commons licence CC BY-NC-SA 3.0.