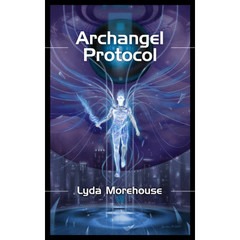 First published in 2001, Archangel Protocol has been brought back to life through the existence of a pirated electronic text. It’s now legally available through outlets such as Wizards Tower Books.

That techno wizardry of some description was involved in the salvage of Morehouse’s text is somewhat ironic given the post-apocalyptic tale that she gives us with the Archangel Protocol. Morehouse delivers a solid tale that has aged remarkably well.

It’s largely detective fiction set in a hyper connected world living on after a third world war.  It draws strongly on cyberpunk themes( and I would probably classify it as such) – a hyper connected world, avatars running around in cyberspace, hackers etc., but also serves up some interesting ideas and commentary on religion and politics in an American context.

Morehouse’s vision of the future, its politics and the state of religions affairs, is plausible fresh and certainly still relevant 13 years on.  Even the technology, or more precisely the way social media is presented in the book doesn’t miss the mark by all that much.

Where it came a little unstuck for me was in the religious plot.  This is more a personal issue for me and not any real reflection on the author. Give me witch kings and wizards and I have no problem suspending my disbelief, the minute we start talking angels in a theological  sense and including them in a story I begin to lose interest.  Perhaps it’s because I view Archangel Protocol as more science fiction than fantasy, because the “world” is closer to our own, that I have a mental speed bump here.

That being said the metaphysical content in the book is fairly ecumenical, the thrust very liberal – the way I prefer my religions to be.

Another good point is its treatment of gay and transgender characters, the world may be harsh to those living outside the very strictly defined norm, but Morehouse presents sympathetic and strong characters from these minority groups.

If you pine for cyberpunk but want to leave behind the mirror shades and the 1980’s then took a look at Archangel Protocol, I enjoyed the reading despite the speed bump. Would I read more Morehouse? Definitely.

This book was provided by Wizards Tower Books free of charge.