Race Fail… or not?

The world continues to get smaller and more interconnected and a consequence of this our cultural experiences and histories begin to rub up against one another.  Nalo Hopkinson, a brilliant Jamaican science fiction writer recently commented on the name of one of the characters in the Green Lantern universe.

I must admit that I face palmed as well, I mean “Kill-a-wog”, come on everyone knows that wog is a derogative moniker for those of darker skin.  Or you would if you were a resident or citizen of the British Commonwealth.  In the United kingdom it refers to Afro-Caribbean, and Mediterranean ethnicities, in Australia it’s generally the later.

But the original creator of the character comes from the US where generally “wog” doesn't have that negative connotation, as pointed out by blogger Will Shetterly.

The Kentucky Fried chicken Ad. below caused an uproar on US television because of the negative associations with fried chicken, black people and the history of slavery.

The Ad., however, featured West Indian cricket supporters and was intended for a different audience and a different cultural experience.  West Indian crowds are known and appreciated for the loud and colourful response to the cricket and from memory there were other adds targeted at other supporters. 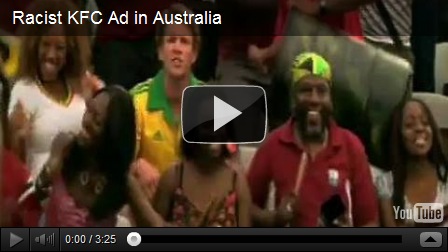 Now I grew up in a town with an American Defence Facility, and my exposure to American cultural norms, is different to that of most Australians, I can see the potential for misunderstanding.

Generally, though despite our similarities Australians and Americans are generally fairly ignorant of one another's cultures.  There’s an oft quoted survey completed in the 1980’s that found that 60% of American’s surveyed confused Australia with Austria.

As creatives, can we, should we, be so widely versed in everyone’s culture that we don’t inadvertently cause offense? Is this possible?