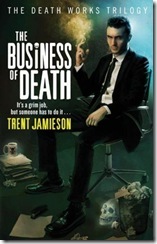 I have a special affection for The Death Works series.  It was Trent’s books that got me into this book reviewing gig.  A fact for which my gratitude swings dependant on the books I get sent.

But seriously it’s been a pleasure reading the series and getting to the end.

To clear up any confusion, the Death Works series was originally released as a trilogy, I reviewed the first two books earlier thisyear (Death most Definite and Managing Death).

At the end of Managing Death, Stephen De Selby ended up being the Orcus, the 13 Regional Managers in one.  He held the Hungry Death within him and managed to finish off his nemesis Rillman.  Now he hears the heartbeat of the world, feels each of the departed souls that his minions pomp.

But this is Stephen we are talking about and he’s got that lackadaisical, “avoid the uncomfortable part of the job until the last minute” thing going.  If he wasn’t trying to avoid asking Lissa to marry him I fear nothing would get done.

But things need to be done, hell is beginning to freeze over, the Stirrer god is coming - now appearing in the sky as a blazing comet. If this wasn’t enough he’s pissed off the Death of the Water.  To say things are looking bleak is an understatement.

Ultimately Stephen grows up and begins directing action rather than letting circumstance dictate it.  It’s a heroic ending and like all heroic endings infused with some tragedy.

Stephen’s growth as a character.  From loser to reluctant participant to world saving demi god.  I really did think he’d come of age be the end of the book.  I also liked and was frustrated by his relationship with Lissa. I had to refrain from yelling at the character to just “ask her already”.

I appreciated the subtle referencing and remixing of myth and legend- Charon building an Ark.There was a distinct impression that the events in the book had all happened before, that echoes had reverberated down through history. I felt centred me as a reader while still being treated to a fresh and original backdrop.

I didn't enjoy the ending, it was perfectly executed though.  I just wanted it to end differently (an old romantic at heart).  The ending  is what made the story more dark/urban fantasy than paranormal for me.

I heartily recommend the whole trilogy to anyone who wants to read some fast paced, original, Australian flavoured urban fantasy.  I found the book to be visually enticing and think it would translate well to television.  Jamieson manages to deliver something that is both mile-a-minute and morbidly evocative.

This copy was provided to me at no cost by the publisher.