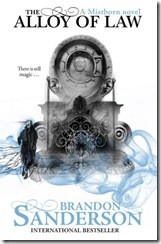 This is my first Brandon Sanderson and on this book alone it probably wont be my last1.

Fantasy is a tough field in which to appear original or even fresh.  With The Alloy of Law though, I felt my self being pleasantly surprised by Sanderson’s take on the march of progress within his own Mistborn Universe.

The The Alloy of Law is set several hundred years after the events of the original Mistborn Trilogy.  If I were to describe it in one sentence, it’s a magical, western, adventure mystery set in an increasingly industrialised fantasy world.

The Tale
Our lead Wax, the black sheep of a respected noble family returns to the city after long years spent in the “Roughs” as a magic wielding, six shooting lawman.  He’s escaping from a tragedy in which he played a part, only to find his noble House in disarray after the untimely death of his Uncle and Sister.

Resigned to acting respectable, Lord Waxillium Ladrian puts aside his former life and sets about finding a marriage of convenience to restore the family’s honour and finances.  It’s not long before boredom and a spate of mysterious robberies and kidnappings draws him back into his previous life.
He’s aided in this adventure by a long time associate and light-fingered friend Wayne and the cousin of the woman he is to marry, Lady Marasi, who is training as lawyer.

Steampunk my dear Watson?
I prevaricated on adding a steampunk tag to The Alloy of Law - it certainly has the pseudo Victorian/industrialisation vibe. It lacks, to my mind though, the Mad scientist/Artificer component. That being said it will appeal to those that enjoy the Steampunk sub-genre.

The mystery component and the interplay between Wax and Wayne has echoes of Sherlock Holmes - a mysterious criminal mastermind, a lead with a tragic past.

A magical mash up of Western and Wuxia
On the surface there’s no direct referencing of Asian culture but the visuals and the moral message of the tale certainly are reminiscent of the Wuxia. Wayne also uses a pair of duelling canes which I take to be a not so subtle tip toward the Filipino art of Eskrima.
Wax’s magical abilities allow him to push off certain metals and to make his body lighter or heavier.  Visually we have a character that can fly, and deflect bullets, another that can alter time. It’s a novel that I think would translate very well to film.

Judging a book by its cover 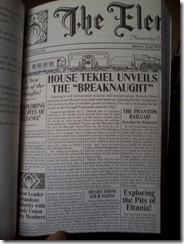 We shouldn’t but we do.  Book art is an integral part of the reading of the text.  In some cases it will be what draws you to a book.  In all cases, I think, it begins that process of drawing you into the world(or distracting you if its bad or ill fitting).

On that note I vastly prefer the white cover by Sam Green, its in keeping with  the rest of the Mistborn Series and has wider appeal than the faux Western style of the US cover.

What I really appreciated was the interior art inserts in the form of The Elendel Daily, a broadsheet from the city in which the story is set in.  A lovely touch that was reminiscent of the 19th Century convention of illustrating novels. An excellent use of art to further aid reader immersion.

As our heroes ride into the sunset
It didn’t knock my socks off but it left me wanting to read more of the lives of Wax, Wayne and Marasi. It left me wanting to explore the world Sanderson has created and the ending certainly suggests that Sanderson will be be forthcoming on more adventures set in this time period.

The Alloy of Law is a fast moving adventure mystery, with trappings of several subgenres and a hint of sexual tension that makes for an enjoyable well rounded read


This book was a review copy provided by the publisher

Footnotes:
1.I do have some issues with Brandon Sanderson’s stance on gay marriage that were a barrier to me enjoying the work – a discussion worthy of its own post.
Did you enjoy this review? Would you like to read more? You can subscribe to the blog through a reader,by Email or Follow me on twitter.