eBook Review–Madigan Mine by Kirstyn McDermott 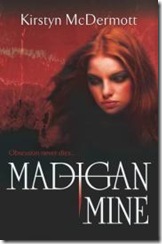 Madigan Mine is Kirstyn McDermott’s first novel1.  It’s won an Aurealis and a Chronos award and has been nominated for an Australian Shadows award and a Ditmar.  Frankly, that’s because it deserves it.

I think if a writer can take you from thinking the main character is an annoying, whiney, pain in the backside, that needs to, as Chopper 2 would say “Harden the @!?! up”, to rooting for him - then they have a rare talent.

Now I am not going to elaborate on the story, spoilers will kill this type of story dead, so here’s a teaser:

Alex is a bit of a loser, an aimless, wandering, ‘unlucky-in-love” soul. His chance at a balanced relationship ruined to some extent by an obsessive, emotionally abusive relationship with rich girl Madigan Sargood.  Then when it seems she has used him up enough, they break up and she kills herself.

Our tragic hero is left without the woman that has defined his concept of love. But has she really gone?

Some books allow the writing to sit at the back of the story, to facilitate it, to disappear behind the curtain as it were.  It can depend on the genre of course.  McDermott’s writing is rich, each word seems deliberately evocative, conjuring up a tangible reality. It’s writing that demands to be noticed, that demands control over your imagination. It’s going exert control of your imagining of the story in much the same way as Madigan does over Alex.

Another mark of a good book is one that can make you feel something for its characters.  I won’t tell you the scene because I want you to feel the pain of your preconceptions being torn away from you.  This book made me curse out loud at the antagonist.  I hate using the ‘C’ word, it’s an ugly gender specific putdown.  Let’s just say I relapsed when it came to Madigan, for this particular scene.

This is not a book for the faint hearted, there’s blood, violence and sex that’s non consensual3.  It’s a mature read.  If you want a dark, emotionally challenging horror story then get this book.

2.or rather Heath Franklin playing Chopper Reid on the The Ronnie Johns Half Hour.