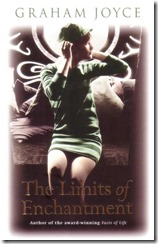 Just a quick note to let you know that Booktopia currently have Graham Joyce’s The Limits of Enchantment on sale for $2.95.

Who’s Graham Joyce?  Well until I listened to the Coode Street Podcast here I had no idea who he was either.  He’s a stunningly good writer of folk-fantasy (like Charles de Lint but with a sparse realism to the work,).  I bought Some Kind of Fairytale after listening to the interview on Coode Street and had to stop after 30 pages because it was that good t.

Good enough for me to buy The Limits of Enchantment at that price without even knowing what it was about. So  I think it’s worth checking him out, I don’t think you’ll be disappointed.
From his blog:


I grew up in the mining village of Keresley, near Coventry. It’s not a place you would find in the tourist guidebooks. A gritty, unlovely place. Salt of the earth people, but if you used words of more than two syllables you were instantly suspected of homosexuality. Mining people tend to be proud and aggressive to defend what little they’ve hacked out for themselves. [Read on]


t I know that sounds weird but I feared that If I kept going I wouldn’t be able to put it down, hence leaving me further behind in my reviewing.  My wife, who doesn’t read fantasy has now absconded with it, another indication of its qualities
Did you enjoy this post? Would you like to read more? You can subscribe to the blog through a reader,by Email or Follow me on twitter.
Posted by Sean Wright at 9:27 AM