Book Review – The Sea and Summer by George Turner 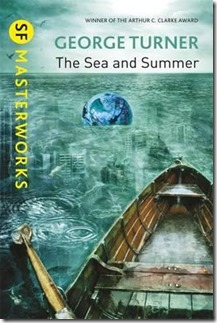 The novel has been out of print for some time, indeed I tried to find a copy a couple of years ago and couldn’t.  Thankfully Gollanz have seen fit to reprint it as part of their masterworks series.
So how, after 25 years, does the book hold up?

Remarkably well is the short answer.  Apart from a couple of historical errors that have crept in with the relentless march of time, it’s a book that fans of Paolo Bacigalupi’s Ship Breaker series and Anna North’s America Pacifica would enjoy.

It’s a story within a story – the survivors of an a slow apocalypse looking back at the end of the Greenhouse culture.

We are introduced to an archeologist taking a playwright around the crumbling monoliths of the Greenhouse culture.  Vast city towers that held 70,000 plus people each.  These are the autumn people living in the age where the earth is rapidly cooling toward another ice age.  The Archeologist has written a novel that makes a narrative from her discoveries and thus the reader is drawn into the tale of a group of pivotal personalities that see out the beginning of the downfall of our culture, the Greenhouse culture.

A didactic novel written in the mode of science fiction realism, in literary terms, its tone feels very similar to English works like Orwell’s Nineteen Eighty Four, its bleak forecast and representation of the poor reminded me a little of A Clockwork Orange.  The Sea and Summer is undeniably Australian though and really should be on the reading list of every Australian science fiction writer.
Turner does note in his afterword that:


Nobody can foretell the future.In a world of disparate aims, philosophies and physical conditions the possible permutations are endless; few guesses aimed beyond a decade from today are likely to be correct, even by accident.

The comment above me made me smile because I think Turner got a lot right in The Sea and Summer, maybe it was pure luck, maybe it was a well rounded knowledge of trends or just an understanding of human nature, but his 2040’s has the rich with large flat screen entertainment terminals that sound a lot like the Smart TV’s that you can buy now (if you happen to be lucky enough to live where you can get suitable internet service).  The broadening gap between the rich and the poor (or Sweet and Swill as they are termed in the book) is happening.  Even the conspiracy at the heart of the novel was apparently voiced by one of Australia’s richest business women yesterday.
The books central message, observation, warning on climate change goes largely ignored today.  Our next likely Prime Minister for example seems confused by the reality of the situation.  The Sea and Summer is not depressing though, realistic in its observation of humans and the disasters we can bring upon ourselves, but also hopeful.

The Sea and Summer won the Arthur C Clark award in 1988 the second year the Award had run.  Turner had earlier won the Miles Franklin for his mainstream work The Cupboard Under the Stairs. Some awarded books fade from our consciousness, some we can look back on and wonder what the voters and juries of yester year were smoking.  Not so with The Sea and Summer, this book deserves its award nomination and deserves to be read.  I’d recommend it as a school text if I didn’t think that forcing teens to read it might result in an aversion to it by virtue of it being a prescribed text.

This book was provided by the publisher.
Did you enjoy this review? Would you like to read more? You can subscribe to the blog through a reader,by Email or Follow me on twitter.
Posted by Sean Wright at 12:17 PM